Recent release “Consequences” from Page Publishing author Gail Poole is a spellbinding romantic mystery centered on Chase and Jana Langley, the close-knit son and daughter of a prominent couple tragically killed in a horrific accident. Their bitter guardian resolves to conceal a family secret and separate them, betraying their trust and denying them the true happiness they both deserve. 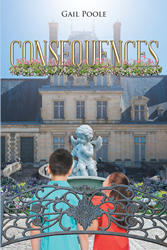 Gail Poole, an avid reader and Georgia native whose love for writing began at an early age, has published her latest book “Consequences”: a riveting tale that keeps the pages turning until the satisfying conclusion.

The Langley name was well-known in the society pages. Both George and Ann were very active in politics, charitable events, the works. The shock of the accident that took their lives made headlines for weeks.

Chase was thirteen, and Jana was eleven at the time of their parents’ fatal accident. Their once-happy life was disrupted when their vindictive Aunt Ada was appointed their legal guardian. It was Clara, their nanny and mansion overseer, that kept them grounded.

The resentment Ada felt and her judgment of the siblings’ relationship with one another caused her to have Jana sent, at age fourteen, to Paris to a girls’ school, and she tried to force Chase to go to UCLA. Chase defied her when he came of age at eighteen and went to Los Angeles School of Photography. Chase and Jana were devastated. They had been very close. They had parted with tears streaming down their faces. He had written Jana a note, and he had a picture he had taken of her on the pier at the lake house, which sustained their love through years of separation. Their lives carried them in totally different directions.

Hairston was their lawyer and godfather who had authority over their estate. He was enraged when Ada closed the Langley Mansion and the lake house and went back to her deceased father and mother’s Langley Manor in Maine. Chase and Jana deserved to know the truth. At least then, they could deal with the mystery that had surrounded and confused them for so many years.

“Consequences” portrays the life Chase chose and the one Jana chose and how they found their way back to their beginning, but still the “truth” remained unrevealed and the mystery that had always overshadowed their lives still left them feeling guilty. They needed to know why. Would they ever understand, or would they continue to doubt the emotions they felt?
Published by Page Publishing, Gail Poole’s engrossing book is a riveting choice for avid mystery fiction readers.
Readers who wish to experience this engaging work can purchase “Consequences” at bookstores everywhere, or online at the Apple iTunes store, Amazon, Google Play, or Barnes and Noble.