Recent release “To Respect a Man” from Page Publishing author Gail Poole is a gripping romantic novel introducing Cathy Carr, a white nurse who falls in love with a handsome black emergency room doctor in an era when such a relationship was socially unacceptable. Daniel’s career and an unfortunate decision take him away from Cathy for years; can the intense bond they shared survive the predations of time and public opinion? 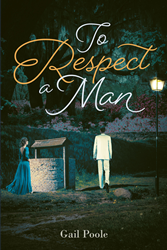 Gail Poole, a lifelong writer and poet whose first novel, “Unlikely Heroine”, was published when she was seventy-two, has completed her new book “To Respect a Man”: a compelling and passionate tale of a love that transcends both time and the racial taboos of the not-so-distant past.

Dr. Connelly was the first African American man to be allowed to attend Belmont. His dream of becoming a doctor was paramount to his existence. He endured racial slurs, being excluded from group norm of the university, and even physical altercations, yet he never wavered from his dream.

Meeting Cathy, a white woman training to be a nurse, was a godsend for him. She refused to let the prejudices of others dictate her life. They became friends in spite of the abuses she endured because of it. This was at a time soon after Martin Luther King was assassinated, and change had begun, but the bigoted society was neither ready to accept blacks as equals nor interracial couples.

After graduation, their lives went in different directions only to meet again at the Memphis hospital where he had secured a position. Three years had passed. Both had feelings for one another but had never expressed them until then. They fell in love but had to meet secretly, so as not to hinder Daniel’s career. He needed to be an example for other young African American men.

He made the decision to accept a prestigious position in New York, leaving the woman he loved behind. He later married the African American daughter of the head of Atherton Memorial in New York to advance his opportunities. Yet his love for Cathy was always present.

She returned to Atlanta to live with her grandmother until her son was born. She had kept her secret from Daniel, not wanting to destroy his chance to fulfill his dream. They both struggled with the realistic side of life. Their love was so strong.

Follow the years of their pain and never-ending love. Life has a way of making a full circle.

Published by Page Publishing, Gail Poole’s engrossing book is a gripping and potent tale of love, forgiveness, and enduring love.

Readers who wish to experience this engaging work can purchase “To Respect a Man” at bookstores everywhere, or online at the Apple iTunes store, Amazon, Google Play, or Barnes and Noble.