“Game On: Staying Strong Against Adversity” from Christian Faith Publishing author Gary Keating is the tale about the power of faith, courage, determination, perseverance, and a one-of-a-kind bond between father and son. 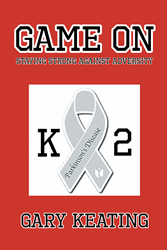 “Game On”: a moving, heart-wrenching, but ultimately uplifting tale of one family’s fight with Parkinson’s disease. “Game On” is the creation of published author, Gary Keating, a graduate of St. John’s University and former assistant college basketball coach who stepped away from coaching to help his father, who had Parkinson’s disease, and was himself later diagnosed with young-onset Parkinson’s.

Keating writes: “This relaunch of the original short story with some newly added parts tells of my father and I’s basketball days—the years spent together and for some short periods apart on the court but always together in life. As was described to me, what isn’t written is just as important as what is written. Even though basketball is the backdrop and is not the full story, there is a bigger meaning: always be thankful for what God has given us, as Dad always taught. You may not see it directly, but as you look into the following, it is there in several situations, especially in moments we had to tell our teams in some tougher times.”

Published by Christian Faith Publishing, Gary Keating’s new book is the story of one man’s awe-inspiring perseverance, faith, and courage throughout a battle with Parkinson’s Disease that has lasted over a quarter of a century.

Far from a misery diary detailing the destruction wrought by the disease, Keating’s tale is a message of hope that offers critical insights into how sufferers of Parkinson’s and other illnesses alike can find the strength and faith required to get through life’s most challenging trials.

Consumers can purchase “Game On” at traditional brick & mortar bookstores, or online at Amazon.com, Apple iTunes store, or Barnes and Noble.

For additional information or inquiries about “Game On”, contact the Christian Faith Publishing media department at 866-554-0919.