Accompanying video offers an action-packed look at the secrets of how the Russian elite Special Forces are trained for action, and also shows how the Russian Army works. 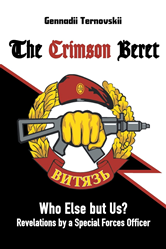 The Crimson Beret by Gennadii Ternovskii

“This book is not only a fascinating read but tells an important behind-the-scenes story about the military. We are thrilled to announce its release." - Robert Fletcher, CEO of Strategic Book Publishing and Rights Agency

Russian Special Forces must survive one of the world’s most difficult exams to earn the right to wear the symbol of valor and honor of special forces: the crimson beret.

The novel "The Crimson Beret" presents a dramatized tale of these modern-day Spartans, both fearless and seemingly invincible, as they face the toughest enemies confronting the Russian people. The book’s video explores the friendship and intense brotherhood of these warriors, shows how real courage and heroism fit into the picture, and reveals the self-sacrifice and reckless bravery necessary in those who fight the world’s battles. Then there are the women who provide the support that bolsters these brave soldiers.

Lis, looking through the SWD optics, reported, “I can see the second terrorist through the side wall window. He’s holding a hostage.” “Got you,” Yegor answered and lowered his hand with the radio. “I give you another half hour!” the terrorist cried out loud. “Then the first hostage is to fly down!”

Right then, the spidermen group, having secured their ropes, started going down. Two of the spidermen, carrying AK–74, descended along the window line, coming to a halt between the fifth and the fourth floors, while the third spiderman, with an APS, his head upside down, climbed down to look over the edge of the window where the terrorist was standing, and now hovered at the height, controlling him.

“This book is not only a fascinating read but tells an important behind-the-scenes story about the military. We are thrilled to announce its release,” said Robert Fletcher, CEO of Strategic Book Publishing and Rights Agency.

THE CRIMSON BERET: WHO ELSE BUT US? REVELATIONS BY A SPECIAL FORCES OFFICER (ISBN: 978-1-62857-526-2) is now available for $18.95 and can be ordered through the publisher’s website: http://sbprabooks.com/GennadiiTernovskii or at your favorite book seller.