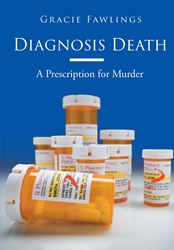 Gracie Fawlings, a longtime hospital administrator in both her native United Kingdom and her adopted home, the United States, has completed her new book “Diagnosis Death: A Prescription for Murder”: a gripping read that follows the interns, residents, and the entire medical staff at a hospital charged with caring for the most needy patients—but behind the scenes, some staff are taking advantage of their charges in a criminal way.

“As an economic downturn causes a city to have paralyzing financial hardships, you learn even good people can be forced to do the unthinkable,” Gracie Fawlings said of the world she creates in her novel. “Consequently, darkness and evil are found to be alive and well at University Hospital, a facility initially started as a safety net for the uninsured.”

Published by Page Publishing, Gracie Fawlings’ creepy novel takes readers behind the scenes into the inner world of doctors and nurses and others whose job it is to care for others, but who are human like the rest of us. As readers get closer to these characters, they learn that these public servants, charged to care for the most vulnerable, are behind unspeakable acts of evil.

“After my husband’s job had our family transferred to the mid-Atlantic coast of the United States from the United Kingdom, I continued to work in hospital administration,” Gracie Fawlings, of Welsh origin, said of her own experience in hospitals. “After having observed two very different methods of health-care delivery, I was inspired to write ‘Diagnosis Death: A Prescription for Murder’, focusing on the health-care system in the United States and the unspeakable evil to be wrought.”

The author plans to write a sequel to this work.

“Diagnosis Death: A Prescription for Murder” can be purchased at bookstores everywhere, or online at the Apple iTunes Store, Amazon, Google Play, or Barnes and Noble.