Author H. Lee Fisher’s New Book “Crunch Time, to Save Our Constitution” Is a Thought-Provoking Commentary on American Politics From a Conservative Perspective

Recent release “Crunch Time, to Save Our Constitution” from Page Publishing author H. Lee Fisher is a detailed discussion of the widening chasm between conservative and progressive political thought and policy, from the Obama administration through the Trump era. 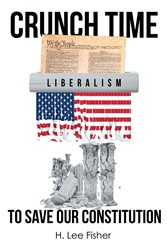 H. Lee Fisher is a career US Air Force pilot, operations analyst, congressional lobbyist, and weapons systems researcher who served as a fighter pilot in both World War II and the Korean War. He has published his new book “Crunch Time, to Save Our Constitution”: a conservative call to restore the U.S. Constitution as the guiding light of American political life.

The author writes, “‘Crunch Time to Save Our Constitution’ depicts the political environment and issues that evolved in the Obama era, as our nation accelerated intrusion of liberal doctrine throughout government and influenced the transition of our society to liberal mores, which had been fermenting since the San Francisco hippies of the early 1940s. With the unprecedented election of Trump, progressive Democrats were marginalized, hindering their indicated goal following installing some form of government apart from our Constitution. ‘Crunch Time to Save Our Constitution’ traces the accomplishments of the Trump administration, irrespective of Democrat obstructionist stratagem—unjustified Mueller investigation, prolonging the Kavanaugh Supreme Court appointment—to deter President Trump from executing his statutory role, and why Democrats are compelled to continue and expand such tactics.

This once great united nation has purposefully and effectively been divided in a manner that places conservatives and liberals on a course to revolution to satiate the thirst for political power. This political theater is displayed to a naive public subject to managed news, unperceiving of the internal threats to our republican form of government. ‘Crunch Time to Save Our Constitution’ unmasks the true forces that are competing for political control of our government and the prime internal threats to our nation’s security. ‘Crunch Time to Save Our Constitution’ provides bold actions to reunite our people, avoid a conflict among neighbors, and return to our Constitution and its values as our Founding Fathers intended.”

Readers who wish to experience this provocative work can purchase “Crunch Time, to Save Our Constitution” at bookstores everywhere, or online at the Apple iTunes store, Amazon, Google Play, or Barnes and Noble.