Author Hector Martinez’s new book “San Carajulian Bendito” is an evocative story of family, justice, and faith in the rugged borderlands between Mexico and South Texas

Recent release “San Carajulian Bendito” from Page Publishing author Hector Martinez is an enthralling blend of his own family lore and the popular Mexican tales of his youth. 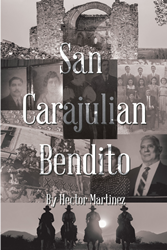 Hector Martinez, a son of Mexican-born parents who was raised in Eagle Pass, Texas in the 1950s, has published his latest book “San Carajulian Bendito”: a gripping and potent story of faith, oppression, and the fight for justice in the Mexican Catholic Church.

Often referred to as Mexico’s “Forgotten Revolution,” the War of the Cristeros, or Christiada, began before and ended after the bulk of Spanish and English language online postings would lead you to believe. Furthermore, these postings have forgotten, that the northern states also participated, otherwise, how else did Texas rangers and members of the KKK enter Mexico to fight the Catholic Church? (Note that these same online postings agree that members of these American groups did participate in this Revolution).

In addition, several Spanish language postings (from Mexico and Spain) mention the fact that a group of Catholic women organized as “Feminine Brigades of Sainte Joan of Arc” and known to the Cristero men as BB’s for Brigadas Bonitas, and provided many services to the cause, including taking money to the US to purchase weapons and ammunition.

Both English and Spanish versions of the War of the Cristeros, or Christiada, coincide in that it started with the election to the Mexican presidency of Plutarco Elias Calles. However, in some Spanish versions, you can find brief mentions of the fact that before becoming, President Elias Calles he was the Governor of the northern state of Sonora. And those that mention this fact also mention that during his administration as Governor, he treated the Catholics of Sonora with the same brutality as he did all “Cristeros” in all of Mexico while president.

In addition to the author’s family stories, San Carajulian Bendito blends popular stories such as the poem “Mi Chacha Micaila” of unknown author and a story line that could very well turn a young man into a “pelon” killing machine. While the Corrido (popular music genre among the disenfranchised in Mexico), “El Moro de Cumpas” depicts an event of the 1950’s, it’s indirect mention in San Carajulian Bendito is included to refer to the birthplace of Plutarco Elias Calles in Agua Prieta, Sonora.

Readers who wish to experience this engaging work can purchase “San Carajulian Bendito” at bookstores everywhere, or online at the Apple iTunes store, Amazon, Google Play, or Barnes and Noble.