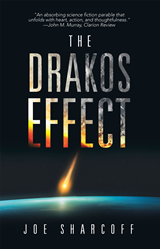 When you read this book you will be on a thrill ride that you never want to get off of, sleep will be lost, and everything else will be forgotten. Joe Sharcoff knocked it out of the park with this novel.

Author Joe Sharcoff has released his debut kaiju sci-fi novel, “The Drakos Effect,” that thrusts readers into the not-so-far-away 22nd century, explores ethical concepts like personal responsibility and touches on the nebulousness of reality as well as objective truth.

In “The Drakos Effect,” the people of Earth inhabit giant fusion-powered cities sprawling across the planet. Humans are host to the Cephians – advanced plant-like aliens – who have been in the solar system for 40 years and are assessing humankind’s readiness to join their galactic community. Although the Cephians are friendly, humanity’s trust begins to wane, at times leading to violence against the visitors.

But astrobiologist Dr. Shana Savarino admires the calm, quiet wisdom of the Cephians and even prefers their company. And after a mysterious being buried in the Chicxulub crater in Mexico is disturbed by nuclear explosions, Shana may be the only person who has a shot at stopping the entity before it wipes out all of life on Earth and in surrounding space.

“When I began writing this book, I really wanted to go back to what I liked when I was a kid – Godzilla, King Kong, stories about big monsters – as opposed to working in the more popular space opera subset of sci fi,” Sharcoff said. “My hope is that readers will have fun with ‘The Drakos Effect’ and experience the awe a good kaiju story often elicits as they progress through it.”

Ultimately, Sharcoff’s book reminds readers that there is more to reality than meets the eye and mind and puts forth a simultaneously action-packed and introspective tale that operates in a realistic and socially complex landscape.

“A well-written, imaginative tale of humans, aliens, and the choices they face.” – Kirkus

“‘The Drakos Effect’ is an absorbing science fiction parable examining the importance of action versus inaction. It unfolds with heart, action, and thoughtfulness.” – Foreword Reviews

“When you read this book you will be on a thrill ride that you never want to get off of, sleep will be lost, and everything else will be forgotten. Joe Sharcoff knocked it out of the park with this novel.” – Pacific Book Review

About the author
Joe Sharcoff has lived most of his life in New York and completed his graduate degree in psychology in California. Happily married and the father of one daughter, Sharcoff is retired after serving for 29 years as a psychologist for New York City public high schools. In addition to writing, he also enjoys working out and lucid dreaming. Sharcoff currently resides in Douglaston, N.Y.