Author Irene Kathryn Haynes’s new book “When the Doctor Is Bad, He Is Very, Very Bad: Stolen Heredity” is a deeply personal memoir of her troubled marriage and divorce.

Recent release “When the Doctor Is Bad, He Is Very, Very Bad: Stolen Heredity” from Page Publishing author Irene Kathryn Haynes is a heartrending account of the inevitable demise of a toxic relationship, the cruel vindictiveness of her imbalanced ex-husband, and the devastating loss of custody of her young twins. 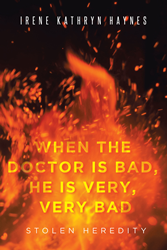 Irene Kathryn Haynes is an animal advocate and avid gardener who holds a Master’s in education and resides with her husband of nearly forty years, three cats, and a dog. She has completed her new book “When the Doctor Is Bad, He Is Very, Very Bad: Stolen Heredity”: a candid autobiographical reflection on her long road to recovery after an abusive marriage and turbulent divorce.

This compelling narrative is based on a true story. It is about a romance and betrayal at a time in history when changes in the California divorce laws in the early 1970s made no provisions to help women cope with the new laws. There were nightmare stories circulated of women evicted from their homes and told to go to work, while husbands were left in the home with the children, and there were numerous stories of men seeking child support and alimony. It was obvious at that time that some people were not aware of the purposes of the change in the law, which were intended to make the process fair to everyone involved. It was a misunderstanding of the intent of the change, which led to the circumstances that were devised to deliberately punish women for the women’s lib movement, and for having the tenacity to get out of abusive relationships.

The most horrific stories of punishment were to women who were mothers. The welfare of mothers and their children were narratives of ex-husbands taking the children and running out of state or going after the women for custody of their children. As stated previously, the laws in California pertaining to divorce were intended to bring fairness and equality to both individuals in the divorce, but it brought only punishment and suffering to mothers and children. And it was the children who would suffer the most because they need their mothers in order to develop affectively. Many women at this time had not been brought up to be assertive, and many had never been to an attorney. The damage to these women could have been mitigated had they been provided with advocates in the courts in order to prevent unscrupulous attorneys and ex-husbands from taking advantage of them. No one should ever be in a position where they are intimidated into signing papers that are not in their best interest as mothers.

The author writes, “Though time has passed, there are still individuals who are ‘disadvantaged’ or ‘disabled,’ and they should be provided full access to the courts through advocates. This is a must-read for professionals in the field of psychology, psychiatry, law, and education. It is highly recommended for women in general, educated or not, and for women who just want to protect their rights as well as those of their family. Most importantly, it is a vibrant voice for the have-nots who just want to survive in a progressively intimidating world.”

Readers who wish to experience this engaging work can purchase “When the Doctor Is Bad, He Is Very, Very Bad: Stolen Heredity” at bookstores everywhere, or online at the Apple iTunes store, Amazon, Google Play, or Barnes and Noble.