Author J. Paul Hickey’s new book “The General & The Lady: A True Story of Civil Love and War” is a richly detailed portrait of a Civil War hero and the woman he loved

Recent release “The General & The Lady: A True Story of Civil Love and War” from Page Publishing author J. Paul Hickey is a spellbinding work of historical fiction based on the life of Major General John Fulton Reynolds, a highly admired officer of the Union Army before, during, and after the Civil War. 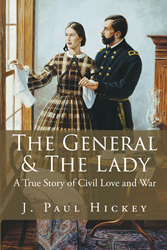 J. Paul Hickey is a former correspondent for ABC News who spent nearly half a century covering events around the world and now resides in South Carolina with his wife, Marcia Sue Clever. He has published his new book “The General & The Lady: A True Story of Civil Love and War”: a compelling work of historical fiction sparked by his work as a docent with the National Park Service at Fort Sumter.

Major General John Fulton Reynolds was destined to become one of the most famous officers of America’s Civil War. He was greatly admired and respected by the men he commanded and by the men who commanded him. President Abraham Lincoln even wanted Reynolds to lead his vast Army of the Potomac. Fate, however, had different plans for the general. He was shot and killed on the first day of the Battle of Gettysburg, taking with him a secret so deep, not even his close family members knew about it. It turns out General Reynolds, who was stern, aloof, and highly principled, had a hidden love affair with a woman much younger than him. Why they had kept their love so private is embroiled with the intrigue of an era driven by war and prejudice so intense, it split the country apart. Their story of true love found and tragically lost is the story of a nation trying to find purpose and meaning among unbridled hatred and bigotry.
Published by Page Publishing, J. Paul Hickey’s engrossing book is an excellent choice for avid historical fiction readers.

Readers who wish to experience this engaging work can purchase “The General & The Lady: A True Story of Civil Love and War” at bookstores everywhere, or online at the Apple iTunes store, Amazon, Google Play, or Barnes and Noble.