Author Jack Keefe’s new book “Echoes of Purple and Gold” is a surprising combination of history, memories, and echoes of sometimes forgotten stories and tales

Recent release “Echoes of Purple and Gold” from Page Publishing author Jack Keefe shares high crimes, shenanigans, school colors, and other front-page news from the back pages of history. 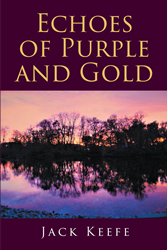 Jack Keefe, who was born and raised in Bloomington, Illinois, has completed his new book “Echoes of Purple and Gold”: a gripping and potent work in which the author stacks local history like cordwood, telling forgotten tales and making odd connections that people no longer suspect.

Author Jack Keefe is a graduate of Bloomington High School and holds a degree from The Ohio State University in Columbus.

He has been a working journalist since 1966, drawing his first paycheck as a reporter for a Columbus radio station. Previously he reported sports scores to WJBC Radio in Bloomington and was a state finalist in a high school speech competition. In 1968 he switched to television. He has been a reporter, editor, and producer on Columbus TV, plus news director and anchorman on stations in Rockford, Champaign, Peoria, Illinois, and Wichita, Kansas.

In 2006 Keefe took up writing the daily column “How Time Flies” in Bloomington’s daily newspaper, “The Pantagraph.” It proved to be a history journalist’s dream: getting paid to read through old newspapers in search of all things interesting, unusual, or important, and then to write about them. During this same time, he wrote numerous historical articles for “Gleanings,” the journal of the McLean County Genealogical Society.

After several manuscripts and two coauthored works, “Echoes of Purple and Gold” is Jack Keefe’s first published book. He lives in Bloomington with his wife, Janet, and their dog, Shiner Bock.

Keefe discusses his work, sharing, “In ‘Echoes of Purple and Gold’, I have selected forgotten stories that barely made it to the next generation in their telling. For example, who knew that General Custer stopped in Bloomington, Illinois, on his way west? Or that an unlikely street name—Magoun Street—honored a man whose name was a household word in town until he was virtually killed off by a local bank failure? And who knew the backstory of the Bloomington High School colors?”

He continues, “These stories have been around ever since they happened. But unless you read Gleanings, the semiannual journal of the McLean County Genealogy Society, you probably didn’t see them. The lone exception to this collection is the title chapter, “Echoes of Purple and Gold,” which appeared in its original form in the Pantagraph on June 25, 1989. The chapters in this book contain a lot of newly discovered facts since their publication as journal articles.”

Published by Page Publishing, Jack Keefe’s remarkable tales are a collection of memorable true stories unearthed from the past.

Readers who wish to experience this engaging work can purchase “Echoes of Purple and Gold” at bookstores everywhere, or online at the Apple iTunes Store, Amazon, Google Play, or Barnes and Noble.