“The Messiah Project” from Christian Faith Publishing author Jeff Lemire is the thrilling tale of a pastor and ex-green beret forced to recall his years of operational expertise when a startling discovery places him center stage of a life-threatening and hair-raising drama. 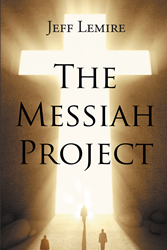 “The Messiah Project”: a gripping page-turner about a pastor catapulted from his peaceful everyday life into a complex and treacherous drama the like of which he has never seen and could never have imagined. “The Messiah Project” is the creation of published author, Jeff Lemire, a missionary, pastor, Bible teacher, husband, father, and grandfather.

Lemire writes: “Springboarding from an almost off-the-wall comment, Jack Spencer is catapulted into a world of deception, intrigue, and danger. Doc Lucas, his best friend, suddenly passes away and leaves Jack to inherit his church, home, and incomplete research into what he came to know as the Messiah Project. As Jack followed Doc’s lead, he discovers facts that were being hidden from the eyes of the world. The deeper he dug into the project, the more dangerous the game became. Jack, a pastor, was formerly a green beret who had also worked for the government on projects so sensitive that the records of his service and training were buried so deeply in the archives that nobody could find them. This was a job that he was uniquely qualified to handle. He just hoped that God would keep him alive long enough to finish the work.”

Published by Christian Faith Publishing, Jeff Lemire’s new book is a rip-roaring tale of intrigue that follows the endeavors of ex-green beret Jack Spencer. Thrust from his harmonious life as a pastor by the call of faith and loyalty, Spencer runs a gauntlet of treachery and unknown foes on a mission to uncover the secrets of the mysterious Messiah Project and finish the work of his belated best friend before the malevolent forces with which he finds himself embattled can destroy him and the project both.

View a synopsis of “The Messiah Project” on YouTube.

Consumers can purchase “The Messiah Project” at traditional brick & mortar bookstores, or online at Amazon.com, Apple iTunes store, or Barnes and Noble.

For additional information or inquiries about “The Messiah Project”, contact the Christian Faith Publishing media department at 866-554-0919.