Recent release “Year of the Fox: A Justin and Sophie Mystery” from Page Publishing author Jeff Southard is the third in his evocative series bringing the mystery of the Byzantine Empire to vivid life following the adventures of the dynamic pair. Readers will once again be swept into the dizzying world of palace intrigue, murder, larceny, and a dangerous mission to Rome as Sophie and Justin navigate myriad dangers in this in thrilling all-new adventure. 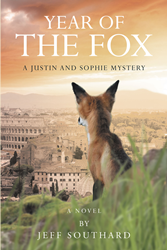 Jeff Southard, a fifth-generation Kansan born in Wichita, retired attorney, and longtime medieval history buff with an emphasis on the Byzantine Empire who lives in an historic neighborhood in Lawrence, Kansas, with his wife Peggy and their dog where he rejoices in KU basketball, has not yet given up on KU football, is active in his church and the community, and takes great pleasure in time spent with his children and grandchildren, has completed his new book “Year of the Fox: A Justin and Sophie Mystery”: a spellbinding tale that keeps the pages turning until its dramatic conclusion.

“Year of the Fox” is the third volume in the continuing saga of Justin and Sophie Cataphlates, a very unlikely husband and wife crime-fighting team. Set in the year 1018, Justin continues as the Treasurer of the Roman Empire (which we now call Byzantine), while Sophie is the chief lady-in-waiting to Princess Zoe, the oldest daughter of Emperor Constantine, one of the two reigning emperors.

While carrying out their duties and raising their daughter and son, the couple must deal with the death of a senator, the forging of gold coins, and the theft of a priceless relic. Then, the fun begins, as they accompany Zoe on a hazardous trip to Rome, the long-ago abandoned capital of the empire where the papacy itself is in danger! As before, the Fatimid Caliph of Egypt is lurking in the wings!

Readers who wish to experience this engaging work can purchase “Year of the Fox: A Justin and Sophie Mystery” at bookstores everywhere, or online at the Apple iTunes Store, Amazon, Google Play, or Barnes and Noble.