Recent release “Soldier Island” from Page Publishing author Jerkwenton Reagan is an action-packed military drama introducing Sergeant Major Larry Smith, who is sent with his team to a classified location and the site of top-secret research focused on the eradication of cancer. The procedures result in an extreme mutation that transforms the patients into deadly killing machines that will stop at nothing to destroy every human being in their path, and Smith must find a way to destroy the creatures and save the lives of his men. 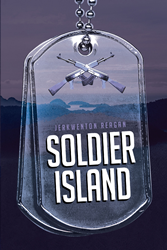 “Soldier Island” is a sci-fi thriller based on scientific events and government conspiracy. Sergeant Major Larry Smith and his team of knights are sent to a remote island known as Soldier Island. The objective was to obtain classified documents and retrieve a scientist known as Dr. Zhan. Sergeant Major agreed with the objective, and though he had his doubts, a soldier does as they’re ordered.

Upon arrival, things were already weird because there was no indication that life existed. Sergeant Major and his knights searched for Dr. Zhan, but they stumbled upon something more—creatures that lurked in the shadows, ex-soldiers who became ill with cancer, and the experiment went wrong. The creatures had military tactics and were smarter than the average human. Along the way, Sergeant Major lost, and he also gained. He found Dr. Zhan, whose goal was to redirect cancer cells and cause them to fight each other in order to destroy cancer, but one of his associates, Dr. Phoin, had other plans.

Sergeant Major soon realized the fight was coming to the land he swore to protect, and they were behind on the chase. Sergeant Major had to sacrifice much more than he expected, including his life and the lives of his loved ones.

Published by Page Publishing, Jerkwenton Reagan’s engrossing book is a fast-paced drama that keeps the pages turning until the stunning conclusion.

Readers who wish to experience this engaging work can purchase “Soldier Island” at bookstores everywhere, or online at the Apple iTunes store, Amazon, Google Play, or Barnes and Noble.