“The United States Constitution: A Directive Issued by Our Founding Fathers to Create a Socialistic Form of Government” from Christian Faith Publishing author Jesus Rodriguez is an eye-opening analysis of the US Constitution that reveals the kind of government and democracy the Founder Fathers intended to create is one far removed from that which exists at present. 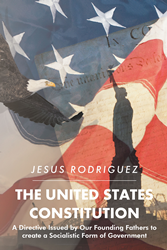 Rodriguez writes: “The United States Constitution”: an erudite and enlightening exploration of the original intent of the authors of the US constitution. “The United States Constitution” is the creation of published author, Jesus Rodriguez, a veteran who served for four years in the United States Air Force, for twenty-six years as a civilian in the Department of Defense, and held Top Secret clearance for thirty years in both branches of the federal government. Rodriguez has a bachelor’s degree in Business Administration from the University of Texas at San Antonio and a master’s degree in Public Administration from Texas State University.

As a veteran, I thank all of the people that might read this book in advance and may God bless all of you and may all of you live long and prosper.”

Published by Christian Faith Publishing, Jesus Rodriguez’ new book is a startlingly original and compelling study of the original intent behind the language employed by the authors of the US Constitution.

Far from a simple rehash of well-worn subject matter, Rodriguez’ book casts the Founding Fathers’ reasoning in an entirely new light with a thought-provoking, meticulously researched, and highly persuasive reckoning. The ramifications of this study are far-reaching and profound, both as regards to legal application in the nation’s higher courts and what an originalist interpretation of intent of this kind entails for the average US citizen today.

View a synopsis of “The United States Constitution” on YouTube.

Consumers can purchase “The United States Constitution” at traditional brick & mortar bookstores, or online at Amazon.com, Apple iTunes store, or Barnes and Noble.

For additional information or inquiries about “The United States Constitution”, contact the Christian Faith Publishing media department at 866-554-0919.