Author Jewel Lee Herder, Ph.D.’s new book “Sexual Violence and the Violence of Silence” is a powerful dissertation about sexual abuse scandals in the Catholic Church

Recent release “Sexual Violence and the Violence of Silence: Clergy Sexual Abuse in the Roman Catholic Archdiocese of Philadelphia” from Page Publishing author Jewel Lee Herder, Ph.D. is an insightful dissertation examining the history of sexual abuse allegations in Philadelphia within the Catholic Church, which is reflective of the overall scope of the Church’s cover-ups of such scandals. 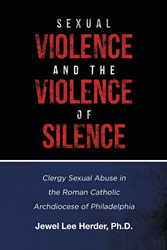 Jewel Lee Herder, Ph.D., who holds a doctorate in historical theology specializing in church and society with a minor in scriptural theology and a Master of Sacred Theology in church history, has completed her new book “Sexual Violence and the Violence of Silence: Clergy Sexual Abuse in the Roman Catholic Archdiocese of Philadelphia”: a gripping and potent dissection of the history of sexual abuse allegations in the Roman Catholic Archdiocese of Philadelphia.

Published by Page Publishing, Jewel Lee Herder, Ph.D.’s powerful work takes a candid look at the clergy sexual abuse scandal in the Roman Catholic Archdiocese of Philadelphia from a historical and cultural perspective. The author reveals the five veils of silence—the actions or inactions of the church hierarchy, congregation, law enforcement, media, and general public—that shrouded the cases of clergy sexual violence and exposed the internal maneuverings by administrative officials to silence all those involved or who knew about the abuses. This violence of silence had a profound effect on the victims by adding to their pain and suffering and interfering with their ability to heal and obtain justice.

The author begins her dissertation with a history of the founding of the Roman Catholic Church in America and the Archdiocese of Philadelphia, leading the reader through the confession and testimony of Father William Hogan, a nineteenth-century priest. Father Hogan acknowledged his role in grooming parishioners in the confessional, attested to the sexually abusive behavior of many of his colleagues, and argued for the pervasiveness of clergy sexual violence in the church.

Throughout this captivating work, the reader will also be exposed to graphic grand jury testimony of the victims of a small representative sample of accused sexually violent priests from the Archdiocese of Philadelphia—Father Gerard W. Chambers, Father Joseph Gausch, and Father Nicholas V. Cudemo—who targeted their victims based on race, class, and gender. The author includes the historical context in which each priest lived and served by presenting these priests to the reader in chronological order based on their date of ordination.

To assist the readers in their understanding of the scope of the cover-up by the leadership of the church, the author examines the administration of the bishops or cardinals supervising the archdiocese during the tenure of each of these predator priests. Taken as a whole, this work engages the reader’s critical thinking capacities and paints a complete picture of the sexual abuse allegations that have long plagued the Catholic Church.

Readers who wish to experience this insightful work can purchase “Sexual Violence and the Violence of Silence: Clergy Sexual Abuse in the Roman Catholic Archdiocese of Philadelphia” at bookstores everywhere, or online at the Apple iTunes Store, Amazon, Google Play, or Barnes and Noble.