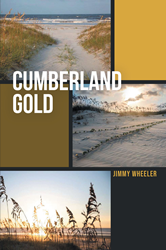 Jimmy Wheeler, broker and owner of JP Wheeler properties, has completed his new book “Cumberland Gold”: a compelling work of historical fiction that takes readers through the past of Cumberland Island, beginning with the story through the eyes of Captain Bo Sam.

Author Jimmy Wheeler writes, “’A treasure on Cumberland Island? Heck yeah, and I know three places where it could be!’ Wilder and Mark knew why everyone who met Captain Bo Sam called him BS for short because every story he told was worth a little embellishing. He had shared some of his collection of artifacts, which he had found on the island, including old military buttons, a musket, other brass buttons, and his most valuable item—a sword. He had found these using his state of the art Garmin metal detector he had paid $1,500 for on eBay. The boys told him they had developed their own theory where to find gold coins and had been given a primitive map that would lead them to the treasure. BS told them they had been watching too much of the Curse of Oak Island, which was a popular series on the History channel. His suggestion to them was to call the brothers who had spent millions of dollars and invite them to help them since the Oak Island treasure located in the ‘money pit’ had not been located in two hundred years. 4 5 Jimmy Wheeler Cumberland Gold He told them they should write a book and call it, Curse of Cumberland Island because almost everything built there had either burned like the Dungeness mansion or disappeared like the forts built on the north and south ends of the island. If these two lads could blend in with the other thirty-five residents of the island, they knew they had a better chance. They were eager to begin—more about that later.”

Published by Page Publishing, Jimmy Wheeler’s engaging tale incorporates interesting historical facts about the island into the story, including that it was designated a national seashore to preserve the scientific and scenic integrity of the island.

Readers who wish to experience this original work can purchase “Cumberland Gold” at bookstores everywhere, or online at the Apple iTunes Store, Amazon, Google Play, or Barnes and Noble.