Recent release “Interstellar Warfare” from Page Publishing author Joe Mont is a riveting work of futuristic fiction introducing Anthony Dawkins, a young man whose determination to chart his own course in life thrusts him into the forefront of an intergalactic battle for the very future of humanity. 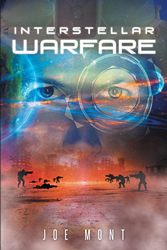 Joe Mont, an avid gamer and former member of the Army JROTC, has published his new book “Interstellar Warfare”: a spellbinding novel that keeps the pages turning until the stunning conclusion.

In the year 2435, a young man named Anthony Dawkins yearns for a life of his own. From a young age, he’s been forced to raise himself and his beloved sister. Anthony’s isolated parents also expect him to take over the family business once he was old enough. As an act of defiance, he joins the Unified Coalition Space Operations Army in a desperate attempt to secure an independent life for both himself and his sister, away from the stubborn control of his parents. While training to become an army trooper, Anthony uses his strong sense of independence to quickly adapt to the harsh demands of military life.

With Insurrectionist forces threatening all the Coalition holds dear, Anthony is sent to the stars to fight against the same enemy responsible for bombing his home city. But after his first deployment reveals that the Insurrectionists are only a small part of a much larger plot,

Anthony and his fellow soldiers are thrust into the largest interstellar war in history seemingly overnight.

With the Coalition in chaos, Anthony must not only keep his promise to return to his sister but also fulfill his oath to defend the Coalition, her colonies, and her citizens.

Published by Page Publishing, Joe Mont’s engrossing book is an excellent choice for avid science fiction readers.
Readers who wish to experience this engaging work can purchase “Interstellar Warfare” at bookstores everywhere, or online at the Apple iTunes store, Amazon, Google Play, or Barnes and Noble.