Author John Cox’s book “Axis of Evil: Feast for Hyenas” is a thought-provoking work exposing a vast array of conspiracy theories related to terrorism on a global scale

Recent release “Axis of Evil: Feast for Hyenas” from Page Publishing author John Cox is a compelling narrative imagining various deeply nefarious motives and machinations behind many of the worst terrorist attacks in history, and the work of a fictitious elite counter-terrorism group on a mission to uncover the dark truths behind the tragedies. 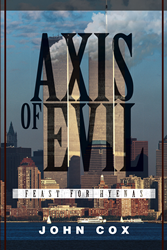 John Cox is an entrepreneur, academician, and married father and grandfather who lives in retirement with Millie, his wife of fifty-three years. He has published his new book “Axis of Evil: Feast for Hyenas”: a gripping and potent work revealing the author’s own theories regarding the high-level groups leveraging the lives of innocent civilians around the globe for geopolitical power.

“Axis of Evil” presents a setting for the aftermath of the 2001 debacle. The players and beneficiaries involved heretofore unrevealed are exposed. The most hideous cabal ever formed or contrived is laid bare. The framework to take these predators down is formed by an ingenious international network of mercenaries.

John writes, “The scope of this book will begin at home and spread to plots touching and impacting every corner of the globe. The physical settings, international intrigue, and complex solutions will arouse you down to your most base emotions. I have endeavored throughout this book to present and defend some very controversial premises. I do, however, leave it to the reader to judge the indisputable facts and occurrences that bear out my theories.

The ultimate goal of this book is to historically expose the hyena players, their identities, location of heads, and have a ‘come to Jesus confrontation and reconciliation up close and personal.’

More importantly, the heads are severed; their assets are seized, and others revealed. Their acts are so despicable they are described as hyenas feeding on the remains, manipulating the outcomes resulting to their favor, and continuing to rule from the shadows. The events contributing to ultimately thousands of deaths worldwide, collapse of several governments/dynasties, civil revolutions, declared wars, and financial rewards claimed and received then and for virtual perpetuity.

The Triad was a secret group formed within this group to recruit, direct, unite, and oversee the distribution of the spoils to the included players. Our group will endeavor to expose the players, mete out justice for wronged parties, and ultimately decimate the entire evil cabal.”

Published by Page Publishing, John Cox’s engrossing book is a provocative work straddling the divide between reality and fiction.

Readers who wish to experience this engaging work can purchase “Axis of Evil: Feast for Hyenas” at bookstores everywhere, or online at the Apple iTunes store, Amazon, Google Play, or Barnes and Noble.

In addition to Axis of Evil, John is also releasing five other books. Readers will follow the story of the same characters as they use their experiences to carry out the sanctions and eventual downfall of the multi-billion dollar Triad Cabal.