‘The Origin of the Follower and His New Actions’ dives into the backstory of the series’ indestructible hero, Axel Tressler 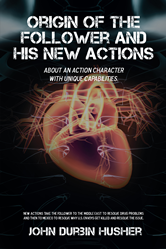 John Durbin Husher, author of “The Follower” and “The Follower II,” has added a fourth book to his exciting crime action series, which follows the international exploits of secret agent Axel Tressler, also known as “The Follower.” “The Origin of the Follower and His New Actions” explores the origin of Axel’s superhuman capabilities and how he was recruited to carry out missions for the United States Science Agency (USSA).

Born shortly after his mother survived a plane crash and two days later than his twin, Adam, Axel exhibited differences from his brother as he grew older. He later learns that his internal organs and cellular DNA mutated during his extra time in gestation, resulting in elevated strength and energy levels. This motivates Axel to study biology and begin working on a body computer system in order to further understand and master his unique genetic makeup.

Meanwhile, Adam pursues a career in government intelligence and connects Axel with a confident at the Pentagon who implants the computer and helps him begin his transformation into “The Follower.” With his new computer, Axel can control his energy levels, understand ten different languages, mentally send messages and make phone calls, and gain access to any information with a simple thought. His special talents make him an asset to the USSA, who calls on him in their hour of need to take on techno-terrorists, bioterrorists, drug cartels and other dangerous global enemies.

Packed full of action, adventure and intrigue, “Origin of the Follower and His New Actions” provides readers with a riveting escape into the high-stakes world of international drug rings and a fearless, indestructible hero to root for.

About the author
John Durbin Husher is an author and retired engineer and executive. He received his Bachelor of Science in Electrical Engineering from the University of Pittsburgh in 1958 and served as the Vice President and General Manager of Micrel Semiconductor for 20 years. Since retirement, he has published 11 books.