Author John Eric Vining’s new book “Violet Lightning” is a fascinating look at a quite different scenario for the conduct of the Second World War in the Pacific Theater.

Recent release “Violet Lightning: A Blueprint for Japanese Victory in the Pacific, 1941-1942” from Page Publishing author John Eric Vining is a thought-provoking exploration of the thesis that if the Japanese had managed their military assets and resources differently, they could have developed or acquired the means to impel the West, particularly the United States, to negotiate a peace that would have allowed them to command the Greater East Asia Co-Prosperity Sphere. 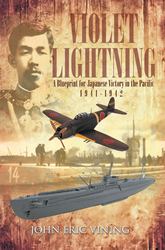 John Eric Vining is a lifelong history buff who hails from Ohio City, Ohio and has spent most of his life in the private study of military topics. He has published his new book “Violet Lightning: A Blueprint for Japanese Victory in the Pacific, 1941-1942”: the culmination of approximately fifty years of study, and nearly eight years of intensive research and writing.

An epic achievement over one hundred years in the making…

In December 1941, Japan had perhaps the greatest combination of land, sea, and air forces the world had ever seen, and she used these to conquer a huge empire in the Western Pacific and East Asia. Yet by August 1945, Japan had been beaten to her knees by the combined power of China, Great Britain, and the United States.

Was this destruction inevitable? Did Japan have no chance to defeat America and her allies? Why would she think she could successfully battle the two greatest industrial powers the world had ever known—Great Britain and the United States—at the same time?

“Violet Lightning: A Blueprint for Japanese Victory in the Pacific, 1941–1942” is a sweeping narrative over a century in the making. From the first confrontation in 1895 between the United States and Japan over Hawaii; to the massive Japanese defeats at Midway and Guadalcanal in 1942; to author John Eric Vining’s first interest in the Japanese-American conflict in the fall of 1967 by reading Carrier War in the Pacific; to the fall of 1995 when Vining first put pen to paper on this project; and finally, to 2020’s finished product by Page Publishing, Vining reviews a history of the acrimony between Japan and the United States in the first half of the twentieth century. He then builds what one reviewer calls a “chillingly believable” scenario for a Japanese victory in the greatest of all wars. “Violet Lightning” poses and answers the question: “Could Japan really have pulled it off?” You just might find yourself coming around to a point of view you didn’t believe was possible.
Published by Page Publishing, John Eric Vining’s engrossing book is a compelling narrative for avid military history readers.
Readers who wish to experience this engaging work can purchase“Violet Lightning: A Blueprint for Japanese Victory in the Pacific, 1941-1942” at bookstores everywhere, or online at the Apple iTunes store, Amazon, Google Play, or Barnes and Noble.