Recent release “Unwinding the 12-Karat Ticker: The Secret of Morley Mountain” from Page Publishing author John Memeo is a breakneck ride from start to finish as three teenagers on a quest for hidden treasure become the target of dangerous criminals also searching for the fortune. 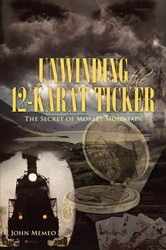 “In Unwinding the Twelve-Karat Ticker: The Secret of Morley Mountain, a rather mundane summer break appears to be in store for good-natured sixteen-year-old fraternal twins Tyler and Samantha Cole and their friend Jake Rogers. An upcoming houseboat vacation on a nearby lake promises to be the highlight.

But a folktale from the bygone gold rush era and clues from an antique pocket watch belonging to a mysterious gambler ignite the prospect of unearthing outlaw treasure hidden near the lake over a century ago. Applying brainpower and old-fashioned legwork, as well as having a bit of luck, the pieces of a curious puzzle begin falling into place.

When the game is almost over, it appears kith and kin will not be able to rescue them. But as the final card is played, the hunters becoming the hunted, and the teens discover that perhaps dogs are not man’s only best friend.”

What will happen as the teens close in on the final clues? Will they make it out alive or will time run out for the young adventurers?

Readers who wish to experience this exhilarating work can purchase “Unwinding the Twelve-Karat Ticker: The Secret of Morley Mountain” at bookstores everywhere, or online at the Apple iTunes Store, Amazon, Google Play, or Barnes and Noble.