Recent release “Wounds of the Heart” from Page Publishing author Joseph Keely is at the same time a deeply personal and historical record of the Vietnam War, the major players in Vietnam and the United States, and the devastating experience of American soldiers returning from serving their country in a stridently unpopular war. This extensively researched work offers a comprehensive understanding of the Postwar era and the geopolitical machinations that led to multinational conflict in Southeast Asia. 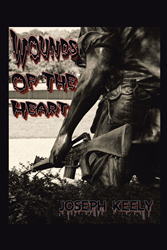 Joseph Keely, a former United States Marine and Vietnam veteran with ten years served on active duty and in the reserves and a retired New Jersey State Trooper with twenty-six years of service investigating major criminal cases, including homicide, has completed his new book “Wounds of the Heart”: an exhaustive work inspired by his own wartime experience and a fierce loyalty to his military brothers and sisters who were so grievously wronged by their nation.

The author writes, “This is for my children and my children’s children so that they may know that their father/grandfather served his country along with 2,909,918 other men and women in uniform in Vietnam. Most of these men and woman remained loyal to their oath as military personnel and served with honor and distinction. I want them to know that our efforts and sacrifices were undermined at every turn of the event by the American people, the American press, and self-centered politicians through lies, propaganda, and treason on a scale so large it was unstoppable. And finally forced the government to abandon its troops on the field of battle to fend for ourselves. That they may also see the real truth surrounding the Vietnam War and the war that has raged within me these past fifty-plus years.

These words were engendered by a comment I heard on television. It angered me enough to conduct a personal investigation to see if the nine lines written above were just a figment of my imagination or what I felt to be true in my heart. This investigation has culminated with mixed feelings. It saddens me that what I felt in my heart is true; however, I am elated that my investigation serves as a vindication of all the Vietnam veterans, both men and women, who remained loyal to their oath as soldiers, sailors, airmen, and marines. I am elated that there is finally a book that countermands the lies and propaganda that have carried on from the ’60s to this very day and that it shows the Vietnam veterans as the loyal and honorable men and women they have proven themselves to be.”

Readers who wish to experience this engaging work can purchase “Wounds of the Heart” at bookstores everywhere, or online at the Apple iTunes Store, Amazon, Google Play, or Barnes and Noble.