Author K. Essence’s New Book “Searching for Freedom: The Nat Turner Revolt” Is a Poignant Work of Historical Non-Fiction Centered on a Life of Courage and Sacrifice

Recent release “Searching for Freedom: The Nat Turner Revolt” from Page Publishing author K. Essence is a biographical account of the life of a young African man who escaped slavery and became a legendary figure in the annals of American history. 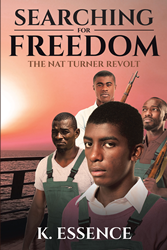 K. Essence is a former runaway and high school dropout from the Del Paso Heights community in the North Sacramento area who went on to earn a bachelor’s of science and looks forward to pursuing a master’s in architectural sciences. He has completed his new book “Searching for Freedom: The Nat Turner Revolt”: a gripping and potent debut novel.

“Searching for Freedom: The Nat Turner Revolt” is a story about a young African boy who had matured into a man being considered a fugitive of American law. The information provided in this story is for the readers of this story to think about Nat Turner more as a person instead of a fugitive of the law or a degraded slave. Many of the books published about Nat Turner have a lack of information regarding Nat Turner’s real life, the people of the town of South Hampton, and the federal government of the United States when it was just considered the government of the North American continent. A few of the political figures mentioned in this book such as Sir James Monroe, Sir John Tyler, and Sir Andrew Jackson were used to bring more life to the story to explain to the readers how things were going based on government planning and how life was for the people living in the early 1800s.

Nat Turner’s true-life story is meant to be known by not just the African American nationality but by all the world’s nationalities because of what Nat Turner stood for during his life. Nat Turner was against the enslavement of black Africans as well as the enslavement of other nationalities. He believed that all men have the right to be independent to raise their own families and to choose their own paths. This story also explains how Nat Turner had found love and the new associations that he had made after he had escaped from his slave owner’s residence. Nat Turner had freed a lot of enslaved blacks, and he and his men had made new families after they had broken free from the custody of their slave owners. Benjamin Turner, Nat Turner’s slave owner, had traveled from place to place looking for Nat Turner for several years until Nat Turner was found. Nat Turner had visited quite a few places during his lifetime, and he had also made several children with a few different women. Nat Turner had done a lot during his life compared to the enslaved blacks, and he was still a very young man when he was killed. Nat Turner had become a legend behind the moves that he had chosen to make, and he had made two very close friends who were considered his brothers who had escaped from their slave owner’s residence with Nat. Nat was a great leader, and some people even considered him to be a king behind the way that he had taken a stand for himself and for his people to be free.

Published by Page Publishing, K. Essence’s engrossing book is a compelling portrait of an American hero of the anti-slavery movement in the early years of the nineteenth century.

Readers who wish to experience this engaging work can purchase “Searching for Freedom: The Nat Turner Revolt” at bookstores everywhere, or online at the Apple iTunes store, Amazon, Google Play, or Barnes and Noble.