Author K.L. Dempsey’s new book “Death Before Its Time” is a psychological thriller that leaves readers breathlessly turning pages to find the next twist

Recent release “Death Before Its Time” from Page Publishing author K.L. Dempsey creates an extraordinary portrait of a woman caught in a labyrinth of revenge and evil by a man of God who is determined to destroy her and her family. 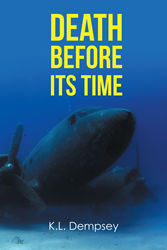 K.L. Dempsey has completed his new book “Death Before Its Time”: a stunning psychological thriller filled with living, breathing characters that move the reader through each page with pedal-to-the-metal speed.

K.L. Dempsey was born in Detroit, Michigan. After completing his formal education in Michigan, he joined the United States Army and was assigned to the Third Armored Division in Kirch-Göns, Germany. Following the completion of his military service, he worked for a commercial helicopter company before being hired by a major airline, where he worked in their marketing and sales division. After taking an early retirement, he was then employed in the MRI and sleep apnea business. Today, he makes his home in a suburb of Chicago, Illinois, working on new material with the support of his family.

K.L. Dempsey’s other works include “The Unholy Vengeance,” “The Vanishing Pharmacist,” “Beneath the Earth,” and “Secrets of Eden’s Dam.”

Author K.L. Dempsey opens his work, writing, “Pastor James Wolf thought that the town was perfect. It was a place where he wouldn’t find himself under fire or any suspicions surrounding him. His closest friends had long ago deserted him, and as far as professional colleagues, well, it would be fair to say none existed either. The media who had once followed his career had now moved on as he had done during the last three years.”

Published by Page Publishing, K.L. Dempsey’s compelling tale follows Kate Heller Patterson, America’s most trusted female investigator, first introduced in the novels “The Unholy Vengeance” and “The Vanishing Pharmacist,” as she finds herself and her family being hunted by the pastor she once successfully put in prison. Suddenly released by the state’s governor for good behavior, Pastor Paul Bergman once again begins to terrorize an unsuspecting congregation while Kate struggles to regain control of her life, which is now faced with its own personal tragedy.

Readers who wish to experience this exciting work can purchase “Death Before Its Time” at bookstores everywhere, or online at the Apple iTunes Store, Amazon, Google Play, or Barnes and Noble.