Author Keith Hill’s new book “The Peace Maker” is a thought-provoking work of fiction imagining a global utopia facilitated by a gifted and determined young man.

Recent release “The Peace Maker” from Page Publishing author Keith Hill is a gripping and potent work introducing Lenny Gordon, a remarkable child whose determination to effect positive change in the world is brought to fruition through divine intervention and supernatural gifts that allow him to fundamentally replace the narrow interest and often malign intent of lawmakers and heads of state with a universal movement toward peace around the globe. 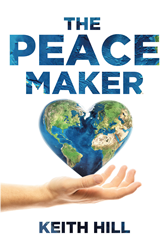 Keith Hill is a Utah native and father of six who played high school and college football, earned an engineering degree from Brigham Young University, managed the Bermuda Tracking Station for fifteen years, during which he got astronauts safely to and from the moon on Projects Mercury, Gemini, and Apollo. Keith now resides in the Charlestown Senior Living Center in Baltimore, Maryland, where he enjoys ballroom dancing. He has published his new book “The Peace Maker”: a compelling debut novel exploring the possibilities of a denuclearized world.

A young man named Lenny Gordon grows up with a burning desire to do something significant that will make our embattled world a more loving place to live. He plays football in high school, achieving honors, resulting in full-ride scholarship to Michigan University, where he also receives much-acclaimed offers to play for NFL teams. Instead of going “pro,” he accepts a job in the industry as a software engineer.

After three years, the old yearning to “do good for the world” encompasses his mind and spirit.

He goes to his special little church and looks upward for “heavenly guidance.” A sweet female voice comes down and blesses Lenny’s peacemaker foray to the troubled world. At this session, he is told that he will be anointed with certain special powers:

With a flick of his fingers, he will be able to “transfix” his audience. He will be surrounded by a luminous shield protecting him from all sorts of physical and ammunition bombardments. In his first peacemaking foray, he confronts the US Congress and initiates the process of establishing a government that forever will not be headed up by a single person. Secondly, he abolishes the ever-bickering “two-party system” and replaces with a “no-party Congress,” elected by popular vote and congressmen can only serve for one eight to ten years term so that the legislators will not legislate to be reelected but rather will work for the good of their constituents.

Then he travels to countries where wars and out-of-control riots are in process. He finds a prominent point and freezes the combatants and threatens to starve them to death if they don’t make peace with one another, stating that he has been dispatched from the Godhead they all worship to carry forth his mission: “Peace and Love Everywhere.”

Then he has the pope gather the heads of all religions, where he freezes the audience and explains that they all worship the same God/Godhead no matter which religion they preach. And the Godhead is made up of both male and female saints who achieved their heavenly position because of their kind and loving lives whilst on the earth, and he also cites that God instilled both male and females a natural desire for sex with each other, so stop condemning consenting adults from having sexual intercourse with other adults, including priests, who seem to be taking out their sexual cravings out on children. And lastly, women are in so many ways more kind and loving and wise than men that they should be encouraged to fill every sort of official responsibility, including the papal office.

Then he travels about the world, leading to the removal of all the countries’ armed forces and armaments. After this, he supervises the selection of “well-vetted” persons from the world’s 195 countries to make up a “Peace and Love Organization,” the PALO, who are the overseers of the peace and love of the whole planet. The PALO assembles them to physics minds around the world who develop an airborne craft that denuclearizes all the atomic arsenals buried around the world.

During his journeys, he meets and falls in love with a beautiful Romanian lady, Romanna. She travels with him on many of his missions, and eventually, they marry and produce a baby boy then a baby girl.”

Published by Page Publishing, Keith Hill’s engrossing book is an entertaining and provocative work of fantasy fiction.
Readers who wish to experience this engaging work can purchase “The Peace Maker” at bookstores everywhere, or online at the Apple iTunes store, Amazon, Google Play, or Barnes and Noble.