Author Kenneth A. Dobbs’s new book “The Idea of God: How Religion Shapes and Sustains Civilization” is an insightful exploration of religion and culture.

Recent release “The Idea of God: How Religion Shapes and Sustains Civilization” from Page Publishing author Kenneth A. Dobbs is a thought-provoking exploration of the historical, political, and philosophical implications of both the implementation and rejection of religion within human civilization. 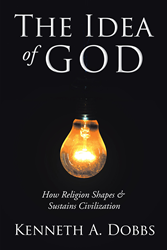 Kenneth A. Dobbs, a passionate writer and educator currently teaching history to eighth- to twelfth-grade students at Holy Family Academy in Manchester, New Hampshire, has published his new book “The Idea of God: How Religion Shapes and Sustains Civilization”: a fascinating discussion of major world religions and their influence on the development of civilization.

What holds society together? How does civilization survive from collapsing in on itself? In this work, Kenneth A. Dobbs describes how religion is the cause of civilization’s rise and prosperity. Beginning with psychological theories on human nature, Dobbs establishes that humanity needs the religious values of truth, beauty, and goodness to flourish. He then proves this psychological theory by analyzing religion’s role in the historical developments of civilization in Mesopotamia, Egypt, Jerusalem, Greece, Rome, and Christendom. He also responds to rebuttals and objections against the thesis that religion is still necessary for modern civilization.

“The Idea of God” explores the historical, political, and philosophical implications of both the implementation and rejection of religion within human civilization. Dobbs articulates religion’s necessary role in civilization, while also provocatively predicting Western civilization’s fate for rejecting religion: societal collapse.

The book follows a long intellectual tradition of historians and philosophers who have argued a similar thesis including Polybius, St. Augustine, Arnold Toynbee, Russel Kirk, Richard M. Weaver, and Christopher Dawson. Dobbs reintroduces these classical ideas to the modern world.

Published by Page Publishing, Kenneth A. Dobbs’s engrossing book is an insightful work in the intellectual tradition of Christopher Dawson, Arnold Toynbee, and Russel Kirk.

Readers who wish to experience this engaging work can purchase “The Idea of God: How Religion Shapes and Sustains Civilization” at bookstores everywhere, or online at the Apple iTunes store, Amazon, Google Play, or Barnes and Noble.