Author Kent Horner’s new book “Snakebit: The Devil and Two Women” is a suspenseful competition between a crippled scientist and a vengeful and malicious criminal 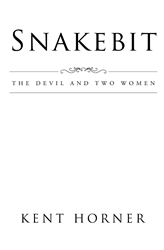 Kent Horner, PhD (biology, Auburn University) is a prolific writer and contributor to a variety of outdoor, scientific, and literary publications whose adventurous younger life placed him with the US Forest Service in Idaho, the US Air Force in Europe, and the Magnavox Corporation in Tennessee before settling him with his family in Scottsboro-Huntsville area of Alabama. He has published his new book “Snakebit: The Devil and Two Women”: an entertaining novel that keeps the pages turning until the surprising conclusion.

Horner writes, “John LaRue was professor of herpetology at Louisiana State University when a green anaconda wrapped around him one night at John’s previous research place. The LSU professor was rescued by Jacob Gigue, his assistant. Both were guarding the Atchafalaya River Basin from constrictor snakes transported from the Everglades of Florida by a narcissistic criminal parading within academic circles as an international scientist.

The fracas between John and Andre Bennelli began one night six years earlier. Then Bennelli had taunted John unmercifully by fondling his female associate, stomping to death his injured pet laughing seagull, degrading John’s truck, and finally hitting John with a triple knotted table napkin. As a result, John gave Bennelli an elbow smash that stumbled him into an antique Coke machine thirty feet across the floor of the Gumbo House restaurant in Saint Martinsville. The narcissistic, double-jointed, and athletic Bennelli never got over losing that fight with John, who had previously been crippled from an accident initiated by a new employee dropping John into a pile of steel girders from a bucket crane of a Shell oil rig located in the Gulf of Mexico.

However, Bennelli, after gaining consciousness, asked John to make a life-for-life sporting bet on which one would die first. Bennelli bet John that he would run him and his wife crazy before he finally killed John and molested Lisa LaFay, John’s wife-to-be later. Lisa, a struggling student nurse, had formerly waited tables at Antoine’s Restaurant in New Orleans and been given generous gratuities by Bennelli for anticipated favors he never received- to his eternal frustration.

To fulfill his narcissistic need for dominance over John and Lisa, Bennelli used techniques taught him by Gypsies passing through Dusseldorf, Germany. Raised north of Paris, France, Andre developed a fetish for snakes when he learned in biology class that snakes had no shoulders. Bennelli used the cultural global warming controversy to show mind control, feeding his narcissistic need for such. Consequently, Bennelli put out pythons on the Natchez Trace; the Nottoway Plantation; near White Castle, Louisiana, the Hermitage in Nashville, Tennessee, and within the Little Pigeon River that runs through Gatlinburg, Tennessee, near the Pancake Pantry. Finally, Bennelli, disguised as a juggling clown, succumbed in an unsuspecting manner at the Opp Rattlesnake Rodeo in Opp, Alabama. Oddly, Bennelli had requested that Dr. Cabbot, his psychiatrist, and John act as coexecutors and see that his body was buried in the family wine vineyard in France.”

Readers who wish to experience this engaging work can purchase “Snakebit: The Devil and Two Women” at bookstores everywhere, or online at the Apple iTunes store, Amazon, Google Play, or Barnes and Noble.