Recent release “Nodus Tollens” from Page Publishing author Kimberly Price is the engrossing fantasy tale about Andrew, the son of a ruthless leader, as he is tasked with a mission to incapacitate a rebel kingdom, Lierra, but his heart pulls him away from his father as he begins to embrace Lierra and its people, making it increasingly more difficult to support his father’s attempted takeover. 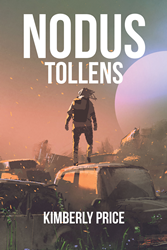 Kimberly Price, who lives with her family on their small animal sanctuary where they rescue, and occasionally rehome, animals in need, has completed her new book “Nodus Tollens”: a gripping and potent depiction of a young man’s struggle between remaining loyal to his father and protecting a small kingdom fighting for a noble cause.

Published by Page Publishing, Kimberly Price’s stirring tale follows Andrew, whose father, Control, is the leader of an oppressive, ruthless kingdom known as Sora and has taken control over almost everything and everyone in the land. With the magic races in hiding, still trying to recover from a tragic war, it seems like Control is unstoppable. Only a small rebel kingdom, Lierra, seems to stand in Control’s way. Control entrusts in his son a crucial mission to cripple the forces of Lierra by infiltrating Lierra, instructing him to send back intelligence and kill of Lierra’s leaders, a shaman named Gerard.

Control trusts that Andrew’s own magic will be enough to get him through this important mission, but once Andrew arrives, he finds himself fighting an enemy he was not prepared for: himself. Andrew is unable to stop himself from falling in love with the people, the kingdom, and to his own shock, the one person in the world with whom he should not fall in love. Now, Andrew is faced with a decision: Should he return to his father, to a life of hatred and abuse? Or should he stay and fight alongside his new friends? Andrew’s adventure takes him to new and unexpected places on his journey of self-discovery.

Readers who wish to experience this gripping work can purchase “Nodus Tollens” at bookstores everywhere, or online at the Apple iTunes Store, Amazon, Google Play, or Barnes and Noble.