‘Rachel versus Sean with Jackson in the Middle,’ by Wayne Lobdell, provides an insightful, middle-ground approach to a wide variety of political issues ahead of contentious 2020 election 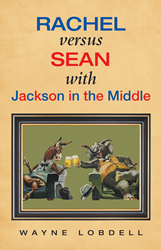 An insightful and funny tale that feels like therapeutic relief working through the extremity of the views surrounding us. Simultaneously entertaining and thought provoking.

Author Wayne Lobdell has published his compelling political fiction book that brings together two at-odds characters – Rachel, an intellectual, liberal woman, and Sean, an articulate, conservative businessman – and gives them each the floor to extrapolate on their philosophies, priorities, and opinions. Moderated by Jackson, a well-read, politically middle-ground bartender, the duo manages to find common ground on everything from economic issues to immigration to guns.

“Rachel versus Sean with Jackson in the Middle” takes place throughout two long, contentious, and sometimes humorous debates in which Rachel, Sean, and Jackson explore historic differences on divisive, hot-button issues between the Republican and Democratic parties and craft innovative ideas and compromises that still pay homage to each party’s unique foundation and ultimate goals. Jackson, self-taught and knowledge-hungry, peppers the dialogue with presidential trivia and humorous anecdotes.

“This book came about as a result of my love to write and my passion for following all things politics,” Lobdell said. “I have long felt that Washington needs to look at both sides of the issues and do a better job of seeking to find compromise.”

As the nation braces for a contentious 2020 presidential election, “Rachel versus Sean with Jackson in the Middle” provides an entertaining respite that can ultimately help readers to understand opposing views and evaluate key political issues in depth from multiple angles.

“Such a perfect book for our politically confused times,” a reader wrote in a five-star Amazon review of the book. “An insightful and funny tale that feels like therapeutic relief working through the extremity of the views surrounding us. Simultaneously entertaining and thought provoking. Highly recommend!”

About the author
Wayne Lobdell is a successful, self-made business developer and author. Growing up poor, Lobdell worked his way through Michigan State University to earn a bachelor’s degree and now owns over a hundred restaurants and multiple real estate properties. He enjoys writing and is an active supporter of the National Writer’s Series, an avid reader of political books, presidential biographies, newspapers, and magazines and a nightly listener of CNN, FOX, MSNBC, and network news stations. Lobdell is also the author of children’s book “Hilly Pilly and the Little White Lie” and his memoir “Climb From the Cellar”. He has been married to his wife, Terry, for 57 years, and they have three sons, one daughter, and 12 grandchildren. Lobdell currently splits his time between homes in Hillsboro Beach, Fla., and Traverse City, Mich.