Author Lee A. Drake’s new book “East St. Louis: A Decade Remembered, The Loss of a Prime Sponsorship” is a candid reflection on the city and its government in the 1970s

Recent release “East St. Louis: A Decade Remembered, The Loss of a Prime Sponsorship” from Page Publishing author Lee A. Drake is a fascinating memoir detailing the intersection of politics, bureaucracy, and race in the life and decline of a midwestern American city. 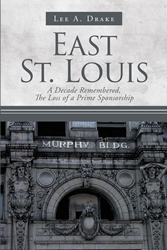 Lee A. Drake is a Vietnam veteran and retired art educator with a doctorate in education administration. Lee taught art and photography for thirty-seven years and now resides with his wife in St. Louis County. He has completed his new book “East St. Louis: A Decade Remembered, The Loss of a Prime Sponsorship”: a cautionary tale illuminating the sad deterioration of a once-thriving midsize city.

East St. Louis, Illinois had, and still has, a very colorful history. Since the 1970’s, there has been a steady decline of this city in the shadow of the Gateway Arch. After returning from Vietnam at the end of 1970, the author found himself working at City Hall in East St. Louis, where he had been raised. This coincided with the election of the first Black mayor of the city. He had friends and relatives in all parts of the city. He knew the streets, alleys, and playgrounds from hanging out in those places during his childhood.

During his employment in the city’s government, there was a loss of control of millions of dollars of federal funds. The actions of certain people in the city’s government contributed to this loss for control. The loss of its Prime Sponsorship designation made it impossible for the city to provide jobs and job training for many people depending on the funds to live.

This account describes some of the actions during that period that led to the loss of its Prime Sponsorship. It will allow the reader some background as to why East St. Louis is a mere shell of its former glory.

Published by Page Publishing, Lee A. Drake’s engrossing book is a clear-eyed commentary on the destructive partisanship that contributed to the decline of an Illinois city in the 1970s.

Readers who wish to experience this engaging work can purchase “East St. Louis: A Decade Remembered, The Loss of a Prime Sponsorship” at bookstores everywhere, or online at the Apple iTunes store, Amazon, Google Play, or Barnes and Noble.