Recent release “Original Content: Seven Stories for Movie Mavens” from Page Publishing author Len Koepsell is a book of compelling and evocative dramatic tales that engage the imagination and keep the pages turning. 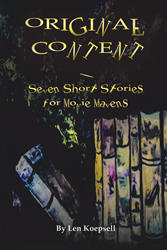 Len Koepsell is a Wisconsin native who moved to California’s Central Coast in the mid-1980s and began his storytelling after four decades of writing, producing, and directing live-music shows. He has published his new book “Original Content: Seven Stories for Movie Mavens”: a well-crafted compilation of captivating short stories.

In “I’d Throw a Party for the Color of Your Shoes,” Tangie, a young algebra teacher, discovers another side of herself when she meets Braulio and ventures into the world of Latin dance competitions. When slander threatens her reputation, Tangie must choose between saving her job and believing in Braulio, a long road less traveled.

“Graveyard Ultimatums” – Confirmed bachelor Frank Goretti has a big heart but a lonely life. He’s looking forward to retiring from the Sioux Falls Police Department when a drug smuggling scheme unravels around him. His two confidantes, the widow Mrs. Addario and Melanie, the music teacher, seem to have his best interests at heart until Sonja, the smugglers’ femme fatale, makes Frank question everything.

In “The Dragons of Westbury,” a boy named Emery living in a seventh-century English town along the Irish Sea, dreams of becoming an architect and marrying his childhood sweetheart, Veronica. The evil Earl of Westbury has other plans.

In “Eisenhower and Me,” Roscoe Emerson, an up-and-coming certified financial planner, recalls his younger days when his golden retriever, Eisenhower, introduced him on a sunny afternoon in Santa Barbara to a nurse he’s been unable to forget.

When Laurie, a party girl known for skinny-dipping at twilight, goes missing, only her cousin Carly learns the real truth. With an FBI agent in hot pursuit, Carly wonders if this truth will set her free or end her journalism career in “My Cousin Who Drowned.”

An old love affair rekindles when Evan, an aspiring writer, and Morgan, his ex-fiancé, find themselves caught inside a triple-con in “Original Content.”

Readers who wish to experience this engaging work can purchase “Original Content: Seven Stories for Movie Mavens” at bookstores everywhere, or online at the Apple iTunes store, Amazon, Google Play, or Barnes and Noble.