Author Leon G. Chabot’s new book “Made in China” is a gripping thriller about one man’s hunt to stop a dangerous international force from attacking the United States

Recent release “Made in China” from Page Publishing author Leon G. Chabot is a pulsating story about Sam Mason, author, and ex-Navy SEAL, who, while researching his latest thriller, uncovers a vast international, long-gestating Chinese plot to attack American soil. Mason must put an end to it to save his country. 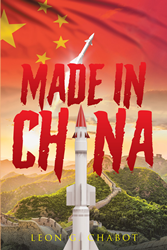 Leon G, Chabot, a one-time musician, and songwriter, has completed his new book “Made in China”: a gripping and potent thriller about one man fighting to save his country from hostile foreign forces.

Published by Page Publishing, Leon G. Chabot’s captivating tale takes place in the wake of the terrorist attacks of 9/11. While the best and brightest forces in United States intelligence are consumed by the relentless hunt for Osama bin Laden and al-Qaeda, a new terror threat goes completely undetected by United States intelligence and grows dangerously closer to fruition with each passing moment. One man alone has six days to stop this deadly attack.

October 16, 1964: The Beatles have invaded American shores, and communist Red China has gained nuclear capabilities, changing the world forever. By the early 1970s, it had become evident to certain party leaders that China’s missile technology was severely lagging, impacting China’s ability to become a superpower akin to the United States and the Soviet Union. An alternate plan was needed. Led by their most brilliant scientist, a renegade faction of the Red Regime formed a secret alliance with a dissident splinter of the North Korean military. Through the hand of the Chinese Tong and an unwitting American mafia, the group set into motion a deadly thirty-year plan.

Sam Mason is writing what he expects will be his most thrilling work yet. But as he delves into his research, Sam slowly comes to realize that his fantastic plot is a grim and imminent reality. An ex-Navy SEAL, Mason acquires proof of China’s sinister, long-brewing scheme, only to find himself hunted by teams of Asian assassins. Now it is up to Sam to convince the commander-in-chief of the deadly Chinese plot and save countless American lives.

Readers who wish to experience this gripping work can purchase “Made in China” at bookstores everywhere, or online at the Apple iTunes Store, Amazon, Google Play, or Barnes and Noble.