Author Louis Friedman’s new book “Planetary Adventures: From Moscow to Mars” is a spellbinding account of his working visits beyond the Iron Curtain

Recent release “Planetary Adventures: From Moscow to Mars” from Page Publishing author Louis Friedman is a fascinating collection of personal stories in the context of exploring other worlds in the solar system through planetary science, and our own world through international cooperation with an overarching goal of bringing the United States and the Soviet Union “Together to Mars”—a peaceful geopolitical goal for the citizens of Earth in the late twentieth century. 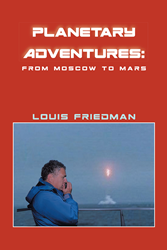 Louis Friedman is an engineer who received his PhD in aeronautics and astronautics from MIT, led advanced projects missions at NASA’s Jet Propulsion Laboratory, and served as longtime executive director of The Planetary Society, which he cofounded with Carl Sagan and Bruce Murray. Together they made it the largest space advocacy group in the world and the first private organization to send a payload to Mars. Louis has published his new book “Planetary Adventures: From Moscow to Mars”: a riveting memoir of his more than fifty trips to the Soviet Union in pursuit of a cooperative mission to Mars and other scientific objectives for the exploration of space.

As the Cold War was ending and the Soviet Union collapsed, Louis Friedman traveled to Russia more than 50 times. Between 1984 and 2005, he worked to advance international space cooperation to explore Mars and other worlds in our solar system. In this book, he recounts his personal stories from those adventures in Russia. Among them are observing a Submarine Launched Ballistic Mission on a Russian Navy ship in the Barents Sea, and testing Mars Rover prototypes on volcanic mountains in Kamchatka. He chronicles his travels to the secret Soviet nuclear laboratory in Chelyabinsk-70 with Edward Teller, the inventor of the hydrogen bomb and hot air balloon flights on a Soviet airfield in Lithuania. These adventures were undertaken to advance the idea of the United States and Russia leading a world effort to explore Mars together. Included is a Chapter and Appendices on the politics, history and challenges of international cooperation for human exploration of Mars.

Published by Page Publishing, Louis Friedman’s engrossing book is a collection of adventures in the Soviet Union in the midst of the Cold War, and a thrilling personal account of the author’s work with some of the most brilliant scientific minds of the last half-century.

“Individuals matter in shaping the course of events in outer space. Lou Friedman was such an individual. This lively book traces the unique and valuable role Friedman played in bridging the U.S. and Soviet then Russian space programs over a transitional two-decade period as the Cold War came to its end.”
—Dr. John Logsdon, Professor Emeritus of Political Science and International Affairs, Space Policy Institute, George Washington University

“This is an important and exciting book. The role that possible joint Mars exploration played in ending the Cold War is a critical, and largely unknown story. Lou Friedman was central to this endeavor. His stories are both revealing and entertaining”
—General (Ret.) Dr. Simon P. Worden, Former Director of NASA Ames Research Center.

“This book recounts many innovative and exciting private contributions to planetary exploration and international cooperation. I remember Lou Friedman's early adventures in Russia pursuing human and robots and American and Russians exploring Mars Together. His interesting stories are prescient and prove the value of citizen supported science.”
—Lori Gaver, CEO of Earthrise Alliance and former Deputy Administrator of NASA

Readers who wish to experience this work can purchase “Planetary Adventures: From Moscow to Mars” at bookstores everywhere, or online at the Apple iTunes store, Amazon, Google Play, or Barnes and Noble.