Recent release “Thunder of the City” from Page Publishing author Louis Tabor is an entertaining narrative introducing Louis “Fuzzy” Duncan, a street-smart tough kid navigating the power struggles between the ethnic and neighborhood gangs of midcentury Baltimore while pursuing a brighter future on the athletic fields of his high school. 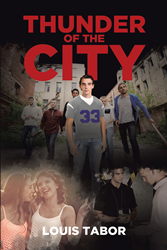 Louis Tabor, a father, grandfather, retired business executive, and US Army veteran who served honorably as a platoon sergeant during the Vietnam War presently living with his wife of fifty-four years in Murrells Inlet, South Carolina, where he loves golfing, working in the garden, and being active in his church, has published his latest book “Thunder of the City”: an evocative work of fiction bringing the turf wars of a 1950s-era city to life.

Tabor writes, “Survival on the city streets of Baltimore depends on toughness, respect gained, and loyalty to each other. Fuzzy Duncan has all these ingredients and emerges as the leader of a large gang in East Baltimore. In his new role, Fuzzy must control the Polish, Irish, Puerto Rican, and Russian neighborhoods. He, along with his right arm lieutenant, Bob O, is determined to change the image of the gang from one of violence to one of the neighborhood guardians. The key issue for all gang members is making money, so Duncan turns to his old Little Italy boss friend who provides a moneymaking opportunity for the gang. As he has continued his pursuit of an athletic scholarship by great performances on the field, serious injuries darken his hope. Duncan is greatly shaken by a terrible major accident that may take the life of his longtime adviser.

Along the way, Fuzzy meets several girls who he really cares about, and one steals his heart even though he has not been truthful. Duncan is highly respected and feared in East Baltimore, and the neighborhood people love him for the protection his gang provides. Fuzzy’s gang has their ups and downs with the police, but he eventually befriends two Baltimore City police captains and is honored by the city. As Fuzzy Duncan hits roadblock after roadblock, he is determined to fly beyond his troubled life and meet his goal of achieving a college education. Can he make it?”

Published by Page Publishing, Louis Tabor’s engrossing book is an inspiring story of determination, perseverance, and luck for a young man seeking a way out of a dead-end life.

Readers who wish to experience this engaging work can purchase “Thunder of the City” at bookstores everywhere, or online at the Apple iTunes store, Amazon, Google Play, or Barnes and Noble.