Author M.C. Cain’s new book “White Smoke, Black Fire!” is a supernatural thriller depicting a modern chapter in the eternal battle between the forces of good and evil

Recent release “White Smoke, Black Fire!” from Page Publishing author M.C. Cain is a gripping and potent saga pitting a small and diverse band of believers against a satanic terrorist organization straight from the bowels of hell. After the Legion of the Basilisk succeeds in a horrific attack that kills a million people from all corners of the globe, this group of unlikely allies must find a way to defeat the demon in his quest to destroy humanity itself. 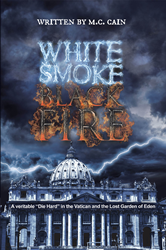 M.C. Cain is an Air Force veteran and corporate image professional who retired in 1990 due to health concerns after an award-winning forty-year career and now serves as executive director of the non-profit traditional Catholic organization, SANCTUS, an acronym for Saving All Necessary Catholic Tradition in the United States, and since 1996 has produced the apostolate's flagship publication DailyCatholic.org. He has published his new book “White Smoke, Black Fire!”: a collaborative work in partnership with his late wife, Cyndi, with whom he wrote this story and others over the course of thirty-three years.

Set in the near future, the demonic Legion of the Basilisk, vanguard of terrorism, has struck at the heart of the birthplace of Abraham near Ur in Iraq during the New World Order's One Covenant ecumenical global media event on the morning of November 1. Among the million eliminated in the blast, are major political and chief ecclesiastical dignitaries from around the world, including reports of Pope Clement XV's annihilation in Iraq. This universal disaster has thrown the global community into a vacuous void, their hopes dashed.

This beginning of the ultimate apocalypse finds an eclectic, ethnic group of ordinary people in strategic vocations catapulted into the smoldering ashes of the Basilisk’s black fire. Taken on this phenomenal physical and psychological journey into hell, skeptical Metroplex Mirror reporter Patrick Gallagher must team up with the enigmatic Greek Nicolas Andriopoulos and the mysterious Fasif Khadid to sacrifice Pat's own goals for a greater need, where he and Niki will need the help of the abstruse Dr. Makuta Ogidi as well as counting on the few resisters within the Vatican in cooperation with a small cadre of loyal Swiss Guards and Cardinal Gregory Zachmunn, including the head of Vatican Universal Communications, Monsignor Stephen Navarro, along with the spunky Irish nun Sister Bridie, all vitally aided by the latest technology of the enterprising Australian media mogul Colin Rembert. Both Pat's inscrutable editor Vic Van Wess, and the love of Gallagher's life, Corrine Morelli must enter the devil’s den to confront the nefarious beast. All must band together in a desperate effort to save mankind and stop the devil himself from being victorious.

With death slithering at their heels, they must engage in a deadly chess game to combat the clandestine Legion led by Pat's publisher American mastermind madman mogul Edwin Blix, devious Elena Grabe, plotting apostate Cardinals Antonio Macelli and Josef Vendem, Sicilian hit men Guillaume Brunatti and Luciano Serrano, gruff Turk Usif Erbet, wily vixen Maria Figuerido, American reporter Jordan Collier, and Blix's lackeys Ans and Soto Ichariak, along with the surreptitious summit of six. The Basilisk's tentacles reach out in political, ecclesial, and foreign intrigue surrounding the expedited election to be signaled by white smoke, notifying the world that the next pontiff has been chosen. The fear is he could very well be a member of the Legion. As the hours, minutes, and the number of resisters dwindle, murder and intrigue lurk everywhere as the Basilisk reveals its hideous form claiming several martyrs of the resistance. After a dying pope delivers a stunning landmark decree to rescue the very soul of the Church in the Sistine Chapel following the Legion's attempted destruction of the Holy See, renewed hope is seemingly crushed again when the few remaining resisters are captured by the Legion and taken back to where it all started.

Though the Legion can destroy buildings and priceless treasure, they cannot destroy the most priceless treasure - man's resolve to triumph over evil. With global hope waning, the few resisters left must make their last stand on the charred ruins of the Field of Death where hell is about to engulf the world as the remaining members of the Legion plot for who will serve as the host to reincarnate Lucifer in the flesh.

Only one weapon, one of great mystery, can stay the evil that has gripped the globe. Will it be enough?

“With men this is impossible, but with God all things are possible.”
—Matthew 19:26
Published by Page Publishing, M.C. Cain’s engrossing book is a spellbinding supernatural thriller that keeps the pages turning until the stunning conclusion.
Readers who wish to experience this work can purchase“White Smoke, Black Fire!” at bookstores everywhere, or online at the Apple iTunes store, Amazon, Google Play, or Barnes and Noble.