Author Mark A. O’Connell’s New Book “The Spartan Succession: The Genesis (1972-1985)” Is a Spellbinding Sequel to His Earlier Work, “The Team the Titans Remember”

Recent release “The Spartan Succession: The Genesis (1972-1985)” from Page Publishing author Mark A. O’Connell is a riveting journey from the locker room to the playing field and beyond, giving readers a keen view of the making and continuation of a high school football dynasty. This volume closes out the final chapters of the Andrew Lewis High (Salem, Virginia) “Wolverines” football team that played the T.C. Williams “Titans” in the 1971 state championship game, and then provides the history of how Lewis’s eventual successor, the Salem High “Spartans”, came into existence and experienced some tough—and even unusual—growing pains before the climactic turning point. 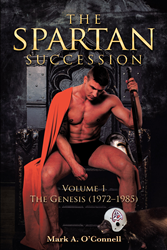 Mark A. O’Connell is a Salem native and current resident of Orange County, Virginia who has served as both a freelance sports correspondent for several newspapers in central Virginia and has provided the play-by-play commentary for the television broadcasts of high school football and lacrosse games. He has published his new book “The Spartan Succession: The Genesis (1972-1985)” which takes the reader through the final days of Wolverine football, to the establishment of a new high school, and to the beginning of a new era with all the important events that helped bring it into full being.

Background: In the 1960s and early 1970s, the Wolverines of Andrew Lewis High won gridiron acclaim under legendary head coach Eddie Joyce. From 1962 through 1971, the Wolverines won two state titles and finished as a runner-up three times. Though unmentioned in the nationally acclaimed film Remember the Titans, their equally compelling story is chronicled in the author’s previous work, “The Team the Titans Remember”.

Located in a city known for its deep civic pride and passion for sports, especially football, a new era began in 1977 when the newly established Salem High opened its doors to the student bodies from both Andrew Lewis and neighboring Glenvar High, which became middle schools. The football program at Salem struggled for years until a huge turning point in 1983. That was when Willis White was hired as the new head coach and soon turned the team into a winner.

Under White and his immediate successor, the Spartans of Salem have succeeded to the throne once held by the Wolverines and, to date, have played in twelve state championship games and won nine!
Published by Page Publishing, Mark A. O’Connell’s engrossing book is a must-read for football fans of all ages.

Readers who wish to experience this engaging work can purchase “The Spartan Succession: The Genesis (1972-1985)” at bookstores everywhere, or online at the Apple iTunes store, Amazon, Google Play, or Barnes and Noble.