Author Mark Breinholt’s new book “Red Tide” is fact-based cautionary tale that explores the real-world dangers that would be posed by a red-tide event.

Recent release “Red Tide” from Page Publishing author Mark Breinholt is a thrilling book that chronicles that potential real-life impact of a red-tide event, in which the earth’s oceans could be increasingly and irredeemably polluted to change life as the world knows it, in the lens of a fictional story also involving a new cold war and a deadly genetically engineered virus. 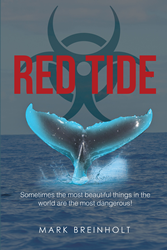 Mark Breinholt, a Navy veteran with a master’s degree in education who has a lifelong desire to write fact-based fictional stories that serve to educate people regarding threats facing the survival of human life, has completed his new book “Red Tide”: a gripping and potent tale that follows three people as they try to warn and save the world from the destructive nature of a red tide.

“When we see a view of the earth, our home, a beautiful blue-and-white gem hanging in stark contrast against the dark background of space, it is hard to imagine there is intelligence born from it threatening not only their existence but also the earth’s ability to sustain its incredible diversity of life. Will the only creatures with the ability to view the earth in its entire beauty from the reaches of space allow its destruction by their own hand? Most human waste, millions of tons of it annually, from cities, agriculture, and industry, over 90 percent of all the waste humans create ultimately ends up in the oceans, primarily through drainage and river systems as well as air pollution. The oceans are being poisoned and are rapidly dying, and if we allow the oceans to die, the earth will die as we know it! It is currently a greater threat to our survival than global warming; human-caused climate change may eventually destroy the earth if drastic steps are not taken to stop it, but pollution of our waters is a more-difficult problem to address, and it is an immediate and imminent threat,” writes Mark Breinholt to introduce his cautionary tale.

Published by Page Publishing, Mark Breinholt’s gripping tale of an impending red tide event that has the potential to threaten human life on earth. A red tide in full bloom at night causes incredibly beautiful electric-blue light explosions of color with every disturbance of the water. However, as with an atomic mushroom cloud billowing into the sky, which is also a stunning sight, the underlying destructive power has the capability to destroy human life on earth permanently.

In this absorbing tale, three people must work together to stop the impending destruction of humanity by preventing a cataclysmic environmental event, an event that is timely as it could have real-world implications. A massive red-tide event has the potential to dump ever-increasing amounts of pollutants into the world’s waters, destroying the sustainability of the environment.

Ken Shakel is a relentless reporter trying to understand threats facing not only his family but the rest of the world. Doug Smith is a renowned marine scientist trying to convey to the world the arrival of what he knew for years was inevitable Alexandria Jane Smith, or AJ, is Doug’s daughter and works with her in his important work. These three people must join forces to prevent the red tide, in addition to stopping the spread of an engineered virus that would make the novel coronavirus look like the common cold. As this mysterious new virus and a new cold war begins, these forces must be put to a definite end by Ken, Doug, and AJ in this enthralling novel with real-life implications.

Readers who wish to experience this gripping work can purchase“Red Tide” at bookstores everywhere, or online at the Apple iTunes Store, Amazon, Google Play, or Barnes and Noble.