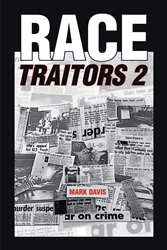 Mark Davis, a Chicago native who retired in 2017 from a forty-seven-year career in law enforcement, thirty-two of which he served with the Chicago Police Department and fifteen as the chief of police for the village of Calumet Park, a small community just south of the city, has published his latest book “Race Traitors 2”: a gritty tale rich in insider police knowledge gleaned from his nearly fifty years on the job.

“Race Traitors 2” presents the continuing conflicts of gang violence and murder in the city of Chicago in the year 1974. A record number of homicides and shootings plagued the city with no end in sight. Gang Crimes detectives, Myles Sivad and Aristotle Ashford were trapped in a wedge of gang violence as they struggled to address the carnage. Detective Sivad often found himself overwhelmed with duties and personal conflicts that subjugated his conscious and stirred his ability to stay focused on the present state of conditions in the city. His partner, detective Ashford was his pillar and he too found himself struggling with the tasks at hand. Murder had become a virus in the black south side communities as mothers of young victims continued to mourn the death of a son.

From 1971 through 1974, hundreds of young black males were murdered or gunshot victims as gang supremacy surged. Detectives Ashford and Sivad were bound by their oath to serve and protect life and property and committed to their pledge. In their attempt to deal with the physical and psychological stress of their duties, they fought against the intruders that were determined to destroy the black community. Entrenched in this struggle, they were forced to become participants in the growing reality of human anguish in an urban warfare that pitted race, culture and dedication to duty in a triangle of conflict.
Published by Page Publishing, Mark Davis’s engrossing book is a richly detailed police drama painting a devastatingly vivid portrait of the heartbreak of a community that lost so many sons to the intractable violence in 1970s Chicago.
Readers who wish to experience this engaging work can purchase “Race Traitors 2” at bookstores everywhere, or online at the Apple iTunes store, Amazon, Google Play, or Barnes and Noble.