Author Michael Fercik’s new book “The Art of Dowsing: Separating Science from Superstition” is a highly informative and technical guide to this fascinating process

Recent release “The Art of Dowsing: Separating Science from Superstition” from Page Publishing author Michael Fercik is a detailed exploration of dowsing, the use of the human neuron electrical system for powering a dowsing rod into seeking wanted objects or elemental masses that are either buried or lying on the surface of the ground. The human nervous system electrically powers and magnetizes the dowsing rod into becoming attracted to the element that is attached to the dowsing rod. 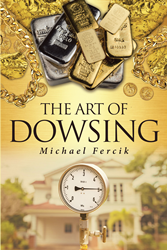 Michael Fercik is a dowsing savant who was raised on a small farm and helped his father with his uranium prospecting side business as a boy. He has published his new book “The Art of Dowsing: Separating Science from Superstition”: an in-depth discussion of the real-world physics involved in dowsing, both on foot and long-distance dowsing from a moving vehicle.

“The Art of Dowsing: Separating Science from Superstition” is the first book ever written that comprehensively explains the physics involved in using the modern ball bearing dowsing rod with gauging by pitting gravity against the elemental magnetic flux lines of the dowsed for element or elemental mass. Gravity is used as a gauge for dowsing the edges, middle, grade, angle of depositing with depth buried. The involved physics of each of the ninety-two natural elements radiating out electromagnetic microwave band frequency from single atoms that combine with other atoms of the same element for producing one elemental magnetic flux line, which combine with all the other same element’s elemental magnetic flux lines for building enough static electrical energy for the human body produced static electricity to energize the dowsing rod’s attached one-tenth-troy-ounce pure element that is dowsed for. The element that is attached to the dowsing rod becomes energized enough by the same element buried in the ground to produce physical turning of the dowsing rod when dowsing toward and over the sought buried elemental mass.

Building and maintaining the modern ball bearing dowsing rod and dowsing on foot or amplified long-distance dowsing from a vehicle is thoroughly explained. Michael John Fercik started dowsing for gold ore veins in 1975 with unknowingly becoming a dowsing savant after figuring out the dowsing physics involved, and this is why he has the natural ability today to write the book that will change the world’s perspective on all the dowsing false superstitions with the correct dowsing theories and proven science and physics of dowsing in the modern world. Physical on ground dowsing and long-distance dowsing from a moving vehicle is explained in laymen terms for enabling everyone to understand the physics involved in dowsing while shown how to build your own modern ball bearing dowsing rod and how to dowse and gauge what is being dowsed. Physicists will be amazed that nobody has explained the physics involved in dowsing and how to use dowsing physics with gravity as a gauge for understanding the size, grade, angle of depositing, and depth buried of the dowsed elemental mass. Dowsing specific wording is explained in a glossary of terms for easy understanding and communications of the required dowsing process of eliminations. Whether or not you want to learn how to dowse, just reading and understanding the recently proven physics of dowsing will excite the curiosity of expanding previously unknown physics of the electrical energies involved in the human body interacting with the electrical energies of solid or liquid or gaseous matter through the modern ball bearing dowsing rod.

Published by Page Publishing, Michael Fercik’s engrossing book is a must-read for anyone interested in learning the art and science of dowsing.

Readers who wish to experience this engaging work can purchase “The Art of Dowsing: Separating Science from Superstition” at bookstores everywhere, or online at the Apple iTunes store, Amazon, Google Play, or Barnes and Noble.