Recent release “Ecstasy of Sin” from Page Publishing author Michael Williams is a dark portrait of a man whose separation from his wife leads him to charge into a gritty world of prostitution, crack cocaine, and non-stop deviant sex from which he cannot break free. He becomes aware of another presence in his house, and he is plunged into a paranormal fantasy world of sex, violence, and compulsion. 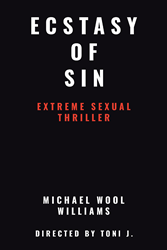 Michael Williams, a married father of two grown children with a lifelong fascination with horror fiction, has published his latest book “Ecstasy of Sin”: a no-holds-barred sexual thriller.

The author writes, “Michael Williams has everything a man could want. He has a beautiful wife, children, a five-bedroom house, two brand-new cars, and he is an aircraft mechanic. He’s intelligent, handsome, and has a great personality and is a charmer. His alcoholism and drug addiction strain his marriage with his wife, Marge, who has also come to abuse alcohol and pills.

They separate, and Michael plunges into the world of promiscuous sex and crack cocaine. He tumbles from his lavish lifestyle to that of a crackhead, an intense alcoholic and sexual deviant.

His relationship with a young lady causes a shocking dilemma. The sexual violence gets deadly extreme. Unbeknown to Michael, his immaculate home was built on top of a brutally murdered and raped woman, and the soul of the woman was at peace with Marge in the home. After her departure, the woman becomes defiant, the invading devil coming into her presence. She possesses their bodies, making them murderously violent. As other spirits join her, their power becomes uncanny and a threat to the earth as we know it.

The only hope that civilization has is an old Indian medicine man. He has to contain the unrested spirits and comfort their causes of limbo on earth, putting them all together for a final confrontation. Unknown to the Native Americans helping to release the tormented spirits, the devil is also invading the spirits, making them do his monstrous bidding. Time is running out, as if the spirits unite, they can walk the earth, bringing the dead from their graves to inherit the earth.”

Readers who wish to experience this steamy work can purchase “Ecstasy of Sin” at bookstores everywhere, or online at the Apple iTunes store, Amazon, Google Play, or Barnes and Noble.