Author Owen Cardif’s new book “Pressed to Kill” is a gripping and potent psychological thriller set in the tropical heat of Miami-Dade County. 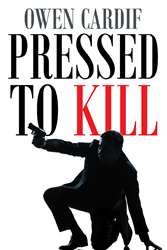 Owen Cardif, a Miami native who draws inspiration from real-life horror tales, has completed his new book “Pressed to Kill”: a spellbinding tale of brutal corruption in the Miami-Dade Police Department as a federal agent must decide where he stands in the fight against injustice.

Owen writes, “A young man’s life changes for the worse when he experiences what most people won’t in their lifetimes. Faced with a number of losses, misfortunes, deaths, and murders of loved ones, he finds himself face-to-face with the very people who have caused him and his family the heartache and pain that will permanently shape his character. His decision to take matters into his own hands will change his life forever.

When a crooked police task force led by a murderous sergeant of the MDPD is placed under a covert investigation under the suspicion of money laundering, murders, and drug trafficking by the FBI, federal agent Aaron Marsh is assigned to work with the task force. Unaware of its corrupted history, he witnesses the brutality and disposal of dead bodies just weeks into joining the force. His instincts lead him to conduct his own investigation of the entire police department. But with each discovery, he realizes that he may be their next target.”

Readers who wish to experience this gritty and realistic work can purchase “Pressed to Kill” at bookstores everywhere, or online at the Apple iTunes store, Amazon, Google Play, or Barnes and Noble.