Author Paris Tolbert’s new book “The Phantom of the Gods” is a gripping saga about facing evil, fulfilling legacies, and standing up for one’s own rights

Recent release “The Phantom of the Gods” from Page Publishing author Paris Tolbert is an extraordinary tale that follows Evmjir, journeying to pave his own path and reign over those who took everything from him. 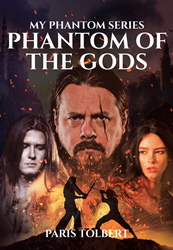 Paris Tolbert has completed his new book “The Phantom of the Gods”: an incredible read detailing the battles of Evmjir, a young elf who is set to fulfill his promise for his family and win against the cruelty of evil that has been dominating their lands.

Tolbert writes, “In nine thousand years of the Second Era, the high and wood elves were united by the high king and queen of the Sheokya Dynasty. Until a young innocence elf had been trapped and lied with encouragement by anger and greed that killed the family that was taken from her. After four months, a young half god, half high elf named Evmjir Dagaryen, had lost everything to an unknown darkness known as the Shadow Brotherhood. As Evmjir found himself and took his broken family to gain what his people had lost, now it was time to begin his training to become the god-king. The gods were watching and the angels had helped the young elf to fulfilled his family legacy as the ruler of the Sheokya Empire and become the dragon-snake emperor. However, the young man had begun to find and help those he had fought to become his most loyal companions to take down the one they whispered about, known as the false emperor.”

Published by Page Publishing, Paris Tolbert’s engrossing narrative is a pursuit for goodness in a land that’s been shadowed by darkness. Evmjir, with his willful heart, works his way to rule over the Empire and bring back what has been lost.

Will he be the key to eliminating evil? Or will the chaos heighten instead?

Readers who wish to experience this enthralling work can purchase “The Phantom of the Gods” at bookstores everywhere or online at the Apple iTunes store, Amazon, Google Play, or Barnes and Noble.