Author Pastor Edd Starks III’s new book “The Myth, the Lie, and the True Facts about Minimum Wage” breaks down the history and impact of the minimum wage

Recent release “The Myth, the Lie, and the True Facts about Minimum Wage” from Page Publishing author Pastor Edd Starks III is a useful guide designed to help readers understand the history of the minimum wage and the power it has over the economy. 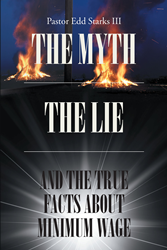 Pastor Edd Starks III, the founding pastor of the 3Way Ministries Christian Church in San Diego, California, where he served for eighteen years, has completed his new book “The Myth, the Lie, and the True Facts about Minimum Wage”: an insightful and educational guide that breaks down the history and effects of the minimum wage. Designed to help Americans understand concepts such as the market crash of 2008 and the struggle of full-time workers who are homeless, this work guides readers through the issues of the American economy and proposes a solution in a living minimum wage.

Pastor Edd Starks III writes, “In 1980 when Ronald Wilson Reagan became president—a man who spent most of his life earning much, much more than minimum wage chose this as one of his first actions as president—he froze, killed, murdered, and destroyed minimum wage. In that one act, President Reagan caused economic terrorism to begin on the poor, the teens, and the middle class, which continues to this day. Reagan claimed his reason for freezing minimum wage was to help the small businessmen or small businesses. But consider this, that terroristic economic war he waged on the poor, the teens, and the middle class is still being waged thirty-eight years later in America, with no true correction or retroaction remedy to come.”

Readers who wish to experience this informative work can purchase “The Myth, the Lie, and the True Facts about Minimum Wage” at bookstores everywhere, or online at the Apple iTunes Store, Amazon, Google Play, or Barnes and Noble.