“The Pyramid Conspiracy” from Christian Faith Publishing author Pat Burchfield is a mesmerizing tale about the enduring, and perhaps eternal, battle between good and evil. 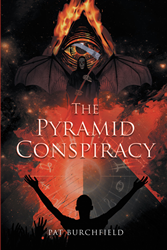 Burchfield writes: “Since the days before the Great Flood, angels, called Nephilim, roamed the land and began to breed with humans, destroying the DNA of mankind and infecting the human race with the evil that had infected them from the fall of Lucifer who then hated God so much he brought sin to the earth in the form of a serpent causing Adam and Eve to fall in the garden, allowing generational sin to continue down through the ages. Just as sons and daughters receive an inheritance from their parents, they also receive sin from the parents as well. But why did Lucifer do this?”

Published by Christian Faith Publishing, Pat Burchfield’s new book is an intriguing and compulsively readable novel about the rise and unassailable presence of the devil within the lives of all of Earth’s inhabitants.

A conspiratorial coterie of demons walk the Earth, tasked with destroying the human race with the aid of an information chip that leaves every human with a choice between earthly survival and eternal damnation. By chance, the task of stopping them falls into the hands of Harry Jordan, an unsuspecting and unlikely hero suddenly thrust into a thrilling and chilling race against time to save the planet from certain destruction.

View a synopsis of “The Pyramid Conspiracy” on YouTube.

For additional information or inquiries about “The Pyramid Conspiracy”, contact the Christian Faith Publishing media department at 866-554-0919.