Author Patrick Sean Kelley’s new book “Charles: A Novel Inspired by True Events” is a riveting saga spanning his life and death in search of lost love and redemption

Recent release “Charles: A Novel Inspired by True Events” from Page Publishing author Patrick Sean Kelley is a thrilling journey that follows Carlos, aka Charles, as he deals with the treacherous realities of life and death within the clutches of a madman, infamously known as just, El Jefe. 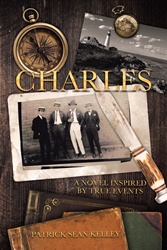 Patrick Sean Kelley, a man with a 20-year career in the advertising world as a writer, creative director, and executive; has completed his new book “Charles: A Novel Inspired by True Events”: a gripping and potent novel that revolves around love, family, injustice, and redemption at any cost.

Kelley writes, “Charles Albert MacDonald, born of Scottish descent in 1902, father of three, husband to one, WWII war-hero and grandfather—claimed to be many things that he was not.
His true birth name was Carlos Alberto Roder, of Trujillo, Peru. Born to a large family of generational cane farmers where on a scorched slice of dusty earth, he grew up hard. And in the year of 1916, our young tough Carlos, a.k.a. Carlito, fell in love with perhaps the right girl, but most certainly the wrong daughter. The daughter to one Rafael Morales Torres, chief commissioner of the Peruvian Civil Guard, and in more intimate circles, known as just ‘El Jefe.’ Carlito’s life was set to end well before he’d reached his seventeenth year. His flaunted love affair with El Jefe’s one precious daughter landing him in a black cell, cut deep beneath the great Inca Citadel of Machu Picchu. Until his father, four brothers, and a family burro named Sid, changed his life’s course forever. Once freed, Carlito was stowed aboard a tattered fishing schooner bound for the Republic of Costa Rica. Hidden away from the prying eyes of those who sought to take his fledgling life.

Or so they’d thought.

From Central America he traveled on across the sultry Caribbean Sea and into the vast cerulean bluster of the Atlantic Ocean. To stand upon Liberty Island in America’s New York Harbor. Huddled, tired and poor, yet free. Free to gaze upon Auguste Bartholdi’s Lady Liberty in all her glory. Where he’d step from a rusted, Irish-made steamer to start a new life under the name, Charles Albert MacDonald. His Peruvian roots and family all but forgotten. Left behind to become the bloodied prey of a new Peruvian order and El Jefe’s brutal rise to power. The girl that would one day be the mother of his child, left behind to perish in agony. To pay for their indiscretions from this life to the next within the callous hands of true evil—the hands of her adopted father—El Jefe.

Charles discovered the many horrifying truths late in life, hollowing his soul, rendering him a broken man. Left to ponder endlessly over a myriad of ‘what if’s.’ The demons of his past roaming freely within him, pulling and pushing at his sanity. But what if he could go back in time to right the wrongs he unwittingly set to motion? To rewrite his life’s tortured story? On the morning of August 28th, 1982, Charles Albert MacDonald passes on. But in an aberrant turn of events, well beyond the natural course of things, he’s given an ‘option.’ A chance at the redemption he’d pleaded and begged for throughout his life. But as he’ll soon find out, true redemption has its price. You see, old scores never really die, they lie in wait, lurking hungerly in the shadow.”
Published by Page Publishing, Patrick Sean Kelley’s fascinating tale is a discovery of haunting truths and an endless battery of challenges throughout a fight for life, justice and redemption at any cost. Will our protagonist end the agony he’s suffered across a lifetime of deception? Or will all of this end him instead?

Find out in this exciting read!

Readers who wish to experience this great work can purchase“Charles: A Novel Inspired by True Events” at bookstores everywhere, or online at the Apple iTunes Store, Amazon, Google Play, or Barnes and Noble.