Author Paul Antonucci’s new book “The Truth Revealed” is a gripping and potent tale of espionage, spec ops, and the shadowy dealings of an unscrupulous administration

Recent release “The Truth Revealed” from Page Publishing author Paul Antonucci is a fast-paced political thriller that keeps the pages turning from the first heart-stopping chapter until the satisfying conclusion. 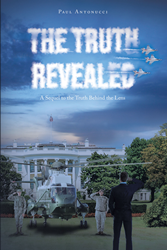 Paul Antonucci, a lifelong resident of Long Island, New York, whose interests include, but are not limited to, US history, government, and politics and enjoys amateur filmmaking, computer programming, and spectator sports in his free time, has completed his new book “The Truth Revealed”: a riveting sequel to his prior work, “The Truth behind the Lens”.

Paul writes, “Paul Mitchell and Matthew Pierce have been taken by assassins from their old agency, who have long since hunted them down and wanted them dead. Both men have accepted the notion that their mission has failed and that they would end up like everyone before them. Before they are shot dead, both men manage to break free and escape, where they meet up with Amanda Knox, who has been released from jail by her former partner, Veronica Valdez, who emerged from hiding after many years in isolation. They begin their long journey to Washington, DC, where they are placed into the witness protection program by Attorney General Stephanie Underwood in order to start their new lives. President Atlas receives their folder and befriends Congressman Douglas Kerr, whom he picks to lead the Atlas Commission, created to investigate its contents. As Kerr investigates, several attempts are made on his life. As the dominoes begin to fall, will the president and congressman succeed, or will the truth be buried forever?”

Readers who wish to experience this engaging work can purchase “The Truth Revealed” at bookstores everywhere, or online at the Apple iTunes Store, Amazon, Google Play, or Barnes and Noble.