Recent release “Phaedra Cooper and the Half Boy” from Page Publishing author Paul Drisgula is a gripping coming-of-age novel introducing Xander, a freshman at a private boarding school in upstate New York, and Phaedra, a local girl determined to avenge the suspicious death of her best friend. Their unexpected alliance is ultimately revealed to have been preordained, and their furtive teenage investigations are bolstered by Xander’s newfound supernatural abilities as the incarnation of an ancient Seneca legend. 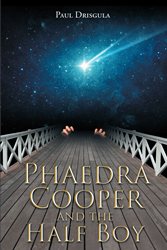 Paul Drisgula is a lifelong Dodgers fan and married father of two who is retired after a thirty-five-year career as president and CEO of a network of Planned Parenthood health centers spanning the Mohawk, Hudson, and Saint Lawrence Valleys, and currently resides with his wife, Mary in Scotia, New York. He has published his new book “Phaedra Cooper and the Half Boy”: a fast-paced and entrancing literary debut.

In 1962, Mother Earth sent fourteen-year-old Xander Gadeski to a small village in upstate New York to uncover the truth behind the suspicious death of a Seneca girl, Pretty Flower.

At least, that’s what Pretty’s girlfriend, Phaedra Cooper, comes to believe when she meets the minor seminarian at Pretty’s grave. She notices an odd connection between Xander and Skagedi, an ancient Seneca legend, who used an array of unusual powers, including splitting himself in half, to defeat evildoers.

The relationship between this naive boy, sheltered by a close Polish Catholic family, and a girl nurtured by her Seneca culture yet isolated on the fringe of white entitlement and intolerance forms the heart of the story in Paul Drisgula’s debut coming-of-age mystery novel.

Xander is an unlikely and unwilling recruit to Phaedra’s cause. His father, Stary, just died. His immature brain still can’t wrap itself around God letting the Dodgers slip out of Brooklyn. Before meeting Phaedra, he is bullied continually and suffers a vicious sexual assault at his new school.

The supernatural and natural worlds flow together like hot and cold from a tap as Phaedra and Xander forge an uneasy alliance to disprove the findings of the village police that Pretty’s death was a suicide. Phaedra suspects boys from Xander’s school murdered the love of her life. Pretty Flower communicates with the two amateur detectives through dreams as they forge a dangerous plan climaxing in an outdoor trial on the bridge where death found Pretty Flower and where Xander must use his new powers if he’s to avoid a similar fate. In Drisgula’s novel, Xander tells his own story, often with a lighter touch, softening some of its harsher themes by unmasking the dark humor skulking in the shadows behind forbidden sex, bullying, death, rape, murder, and sin.

Published by Page Publishing, Paul Drisgula’s engrossing book is a gripping work of fiction that keeps the pages turning until the satisfying conclusion.

Readers who wish to experience this engaging work can purchase “Phaedra Cooper and the Half Boy” at bookstores everywhere, or online at the Apple iTunes store, Amazon, Google Play, or Barnes and Noble.

Page Publishing is a traditional, full-service publishing house that handles all the intricacies involved in publishing its authors’ books, including distribution in the world’s largest retail outlets and royalty generation. Page Publishing knows that authors need to be free to create - not mired in logistics like eBook conversion, establishing wholesale accounts, insurance, shipping, taxes, and so on. Page’s accomplished writers and publishing professionals allow authors to leave behind these complex and time-consuming issues to focus on their passion: writing and creating.