Recent release “Enoch Crosby: The Shoemaker Spy” from Page Publishing author Paul E. Collins is a true account that follows Enoch, an itinerant shoemaker, unexpectedly coming across the Tories who were plotting assistance to the British. He never imagined how this encounter would change his life in an instant. 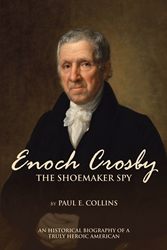 Paul E. Collins, a writer who was an English teacher for thirty-three years, has completed his new book “Enoch Crosby: The Shoemaker Spy”: a fascinating read set in 1776 that revolves around the rising rebellion in America and a shoemaker who has more than what it takes.

Collins writes, “It was the summer of 1776. In New York City George Washington’s army faced an overwhelming frontal attack by the British army and navy. Tories in the adjacent counties north of the city were forming companies to assist the British by attacking Washington’s rear guard and preventing the patriots’ escape. As Enoch Crosby traveled alone plying his trade, he fell in with a band of these Tories. Crosby might have spent his days as an itinerant shoemaker, but colonial America was spiraling into a maddening rebellion. The decision he made that night would change his life forever.”

Published by Page Publishing, Paul E. Collins’ captivating history takes readers back in time to 1776 America when the British are forcing their way into the country. Here, a traveler by the name of Enoch Crosby was pulled into the chaos.

Readers who wish to experience this enthralling work can purchase “Enoch Crosby: The Shoemaker Spy” at bookstores everywhere, or online at the Apple iTunes Store, Amazon, Google Play, or Barnes and Noble.