Author Paul K. Schwartz’s new book “Trump- The Shell Game: The Conning of America” is a thought-provoking collection of his newspaper columns focusing on Donald Trump

Recent release “Trump- The Shell Game: The Conning of America” from Page Publishing author Paul K. Schwartz is a crystallization of the mismanagement, corruption, and mendacity of the current presidential administration led by Donald J. Trump. This collection of his insightful newspaper columns chronicles in real time the historically shocking presidency that begins with his startling “American carnage” inauguration speech and stretches through an endless series of scandals, high-profile firings, and the dereliction of duty to American national security that led to his impeachment. 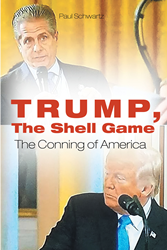 Paul K. Schwartz, a former federal official, is a political columnist with the Maryland-based “Montgomery County” and “Prince Georges County Sentinel” newspapers, the author of “A Citizen’s Perspective: Society, Hypocrisy and the 2016 Election Season”, which followed the Republican and Democratic 2016 presidential campaigns, and the recipient of the 2016, 2017, and 2019 MDDC Press Association Awards for Local Column: Critical Thinking and Editorial Blog Video. He has published his new book “Trump- The Shell Game: The Conning of America”: a searing indictment of a manifestly unfit president.

The author writes, “To describe Donald J. Trump as unfit for office is not sufficient unless you can also explain in detail exactly why. That is what this book is intended to do and in great detail as captured in a series of columns written by the author. Paul Schwartz is a political columnist and has focused on the Trump administration and its mismanagement, from Trump’s misunderstanding of import tariffs to his total lack of understanding of how illegal drugs are smuggled into our country across the southern border to his embarrassing July 4 speech in front of the Lincoln Memorial during which he referred to George Washington’s use of air power. If you want to reminisce about Trump’s miscues, this is the book for you. It is a time capsule of that administration from inauguration to impeachment.”

Readers who wish to experience this engaging work can purchase “Trump- The Shell Game: The Conning of America” at bookstores everywhere, or online at the Apple iTunes store, Amazon, Google Play, or Barnes and Noble.